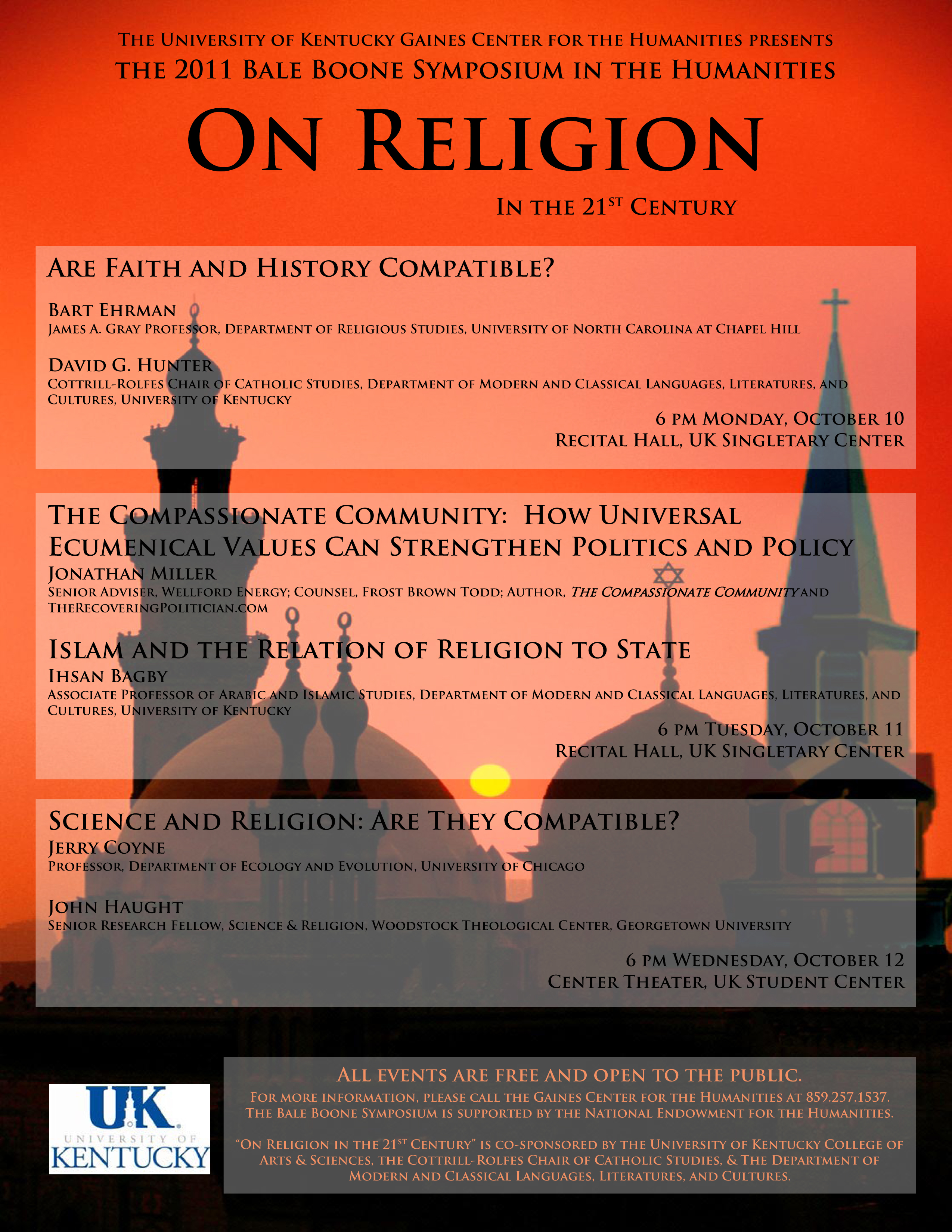 The University of Kentucky Gaines Center for the Humanities will present the 2011 Bale Boone Symposium in the Humanities Oct. 10-12 on the topic of religion. The free public symposium, "Religion in the 21st Century," will give the public an opportunity to explore the connections between religion and such topics as history, science and politics.

Three presentations on religion are scheduled for the 2011 Bale Boone Symposium. The event will open with the session "Are Faith and History Compatible?" featuring speakers Bart Ehrman, the James A. Gray Professor at the Department of Religious Studies at the University of North Carolina at Chapel Hill, and David G. Hunter, Cottrill-Rolfes Chair of Catholic Studies at the UK Department of Modern and Classical Languages, Literatures and Cultures. This talk exploring the relationship between religion and history will be presented at 6 p.m. Monday, Oct. 10, at the Singletary Center for the Arts Recital Hall.

The following evening, the Gaines Center will present a talk titled "The Compassionate Community: How Universal Ecumenical Values Can Strengthen Politics and Policy" by Jonathan Miller, senior adviser at Wellford Energy, counsel at Frost Brown Todd and author of the book "The Compassionate Community" and the website TheRecoveringPolitician.com. Miller is a former two-term elected Kentucky state treasurer. The second half of Tuesday's session will be presented by Ihsan Bagby, associate professor of Arabic and Islamic studies in UK's Department of Modern and Classical Languages, Literatures and Cultures. Bagby's talk is titled "Islam and the Relation of Religion to State." The second evening's sessions will begin at 6 p.m. Tuesday, Oct. 11, at Singletary Center Recital Hall.

The final evening of the 2011 Bale Boone Symposium will feature the session "Science and Religion: Are They Compatible?"  The speakers at this talk will be Jerry Coyne, professor in the Department of Ecology and Evolution at the University of Chicago, and John Haught, senior research fellow in science and religion at Woodstock Theological Center at Georgetown University. This talk exploring the relationship between religion and science will start at 6 p.m. Wednesday, Oct. 12, at the UK Student Center's Center Theater.

Historically, the Bale mBoone Symposium brings together the citizens of Lexington, Gaines Fellows and other members of the university community to explore themes and genres in the arts and humanities.

The 2011 Bale Boone Symposium, "Religion in the 21st Century," is co-sponsored by UK's College of Arts and Sciences, Cottrill-Rolfes Chair in Catholic Studies and the Department of Modern and Classical Languages, Literatures and Cultures. The symposium is also a recipient of support from the National Endowment for the Humanities.