In 2012, I published an article in Earth-Science Reviews called Storytelling in Earth sciences: the eight basic plots.  Just for background, the abstract reads thus:

Reporting results and promoting ideas in science in general, and Earth science in particular, is treated here as storytelling. Just as in literature and drama, storytelling in Earth science is characterized by a small number of basic plots. Though the list is not exhaustive, and acknowledging that multiple or hybrid plots and subplots are possible in a single piece, eight standard plots are identified, and examples provided: cause-and-effect, genesis, emergence, destruction, metamorphosis, convergence, divergence, and oscillation. The plots of Earth science stories are not those of literary traditions, nor those of persuasion or moral philosophy, and deserve separate consideration. Earth science plots do not conform those of storytelling more generally, implying that Earth scientists may have fundamentally different motivations than other storytellers, and that the basic plots of Earth Science derive from the characteristics and behaviors of Earth systems. In some cases preference or affinity to different plots results in fundamentally different interpretations and conclusions of the same evidence. In other situations exploration of additional plots could help resolve scientific controversies. Thus explicit acknowledgement of plots can yield direct scientific benefits. Consideration of plots and storytelling devices may also assist in the interpretation of published work, and can help scientists improve their own storytelling. 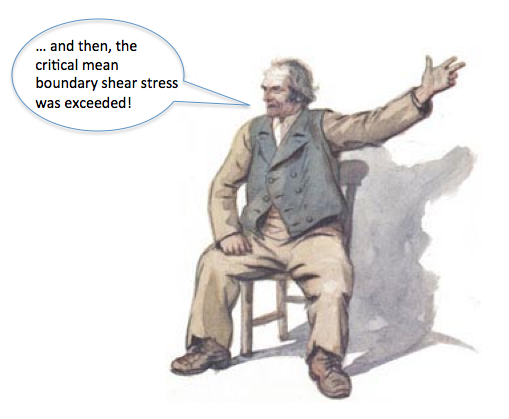 In the past few years I’ve gotten a trickle of messages from people interested in the role of storytelling and narrative in geography, geology, and science in general. Sometimes they ask if I’ve published anything else on this topic. The answer is no, but I have blogged previously on the role of metanarratives in geoscience (part 2 here), romantic geomorphology (part 2 here), and the dialectics of geomorphic complexity.

Some correspondents also ask about other literature on this. I am sure there is much more than I am aware of, and the most interesting/relevant pieces that I was aware of ca. 2011 are cited in the storytelling in Earth sciences article. However, I have become aware since of some other interesting work.

In a piece I should have turned up when working on my article, Norris et al. (2005) developed a theoretical framework for narrative explanation in science. Their focus is on scientific education, but their sophisticated take on narrative structures is applicable to communication among scientists as well.

Daniel Gade’s (2011) book on curiosity and the geographical imagination proposed 14 tenets of the Romantic imagination as it relates to research. Eight of them, in my view, apply readily to geomorphology and geosciences in general, though certainly not all practitioners display or even aspire to all of these traits. The other six can also be interpreted as consistent with and relevant to geoscientists.

In their 2012 piece on “wonder-full geomorphology,” my old pal Deborah Dixon and colleagues wrote of art/geomorphology collaborations, and the role of aesthetics and art in geomorphic science.

Place identities and place attachments (which are closely linked to narratives, stories, and representations) are highly relevant to dealing with climate and environmental change, Devine-Wright (2013) wrote. The research agenda he proposes for investigating and exploiting this fact includes efforts to “capture place attachments and identities,” which obliges engagement with culture, folklore, and arts.

The ethnogeomorphology framework developed by Deirde Wilcock and colleagues (2012; 2013) is multidimensional, but includes a program to integrate environmental stories and narratives with “hard-science” approaches.

My article arose from a sabbatical when I had an opportunity to explore some ideas a bit out of my usual field. I’m sure there is much more that has been done, and to be done, on this. Ideally, I would like to see geoscientists examine their (our) storytelling techniques with the same detail and sophistication we apply to our field, laboratory, and mathematical/statistical methods, and to our cartographical and graphical representations.

Bowman DMJS. 2001. Future eating and country keeping: what role has environmental history in the management of biodiversity? J. Biogeography 28: 549-564.