State-and-transition models in geomorphology, co-authored with Chris Van Dyke, has just been published in Catena. The abstract is below:

State-and-transition models (STM) are used to describe, model, interpret, and predict when landscapes will undergo a qualitative state change. Although rangeland ecologists pioneered STMs, geomorphological STM-type models were developed prior to and independently of ecological STMs. This study categorized 47 geomorphological STMs according to whether they were: based on single or multiple study areas; primarily for description and interpretation or predictive and prescriptive use; explicitly concerned with complex system dynamics; and the role of biogeomorphic interactions in the model. Each STM was represented as a graph and the structure identified. Spectral radii were calculated to measure the complexity of each STM. Although STMs are associated with conceptual frameworks that recognize the possibility of nonequilibrium, alternative states, and path dependency, results show that an explicit concern with complexity does not necessarily lead to the identification of more states and transitions, or a more complex transition pattern. The purpose for which a STM was created, as well as the number of study sites it can be applied to, also had little bearing on the models’ complexity. This review suggests that geomorphic STMs, rather than being used to fit explanations about landscape evolution into predefined theoretical categories, are veridical representations of empirical observations. Although STMs are particularly useful for grasping the biogeomorphological dynamics of landscapes, this review indicates their utility is not limited to biogeomorphology or to systems with a strong ecological imprint. Time scales involved in geomorphic change can make it difficult to observe a large number of states and transitions, which may constrain what types of STM structure can be identified, as the number of observed states and transitions required to develop particular graph structures varies widely. 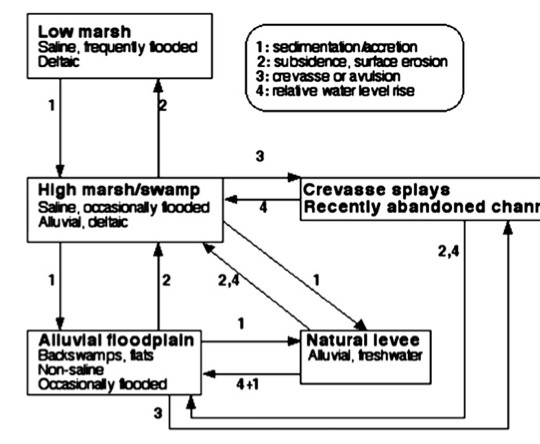