In 2013 I developed and published something called the flow-channel fitness model (FCF; Phillips, 2013; attached). Fitness refers to the fit between channel size or conveyance capacity—yes, it’s a problematic concept, but a venerable one in hydrology and geomorphology. Underfit channels are “too large” for the range of flows they typically convey. They often occur where large channels and valleys were formed during previously wetter climates, or by megafloods or glaciers, with those big ‘ol channels now occupied by smaller streams that rarely overflow their banks and can’t do much to reshape the channel. Overfit channels are “too small.” They frequently can’t hold all the discharge that comes their way and flood frequently. Fit channels, at least as conventionally conceived for alluvial channels in humid climates, have a reasonably good match. They flood (on average and according to the conventional wisdom) every year or two but otherwise hold their water.

The FCF model is a conceptual and practical model for predicting the qualitative response of alluvial channels to modifications of flow regimes—that is, whether channels experience aggradation, degradation or relative stability, and whether aggradation or degradation is dominated by width or depth. The model is based on transitions among seven possible fitness states, triggered by key thresholds of sediment supply versus transport capacity and shear stress versus shear strength, and requires that potential changes in sediment supply and water surface or energy-grade slope also be accounted for. The summary table and diagram from that paper are shown below.

I stand by the FCF model, at least in the context for which it was devised, and recognizing that while criteria are simple (fitness, sediment supply vs. transport capacity, shear stress thresholds) they are hardly easy to deal with in terms of measurement or change over time and space. I decided to revisit it, however, to ignore the problematic fitness concept (in part because I’ve dealt with so many lower coastal plain streams that flood frequently under any circumstances and for which overfit and fit are irrelevant). While the FCF is essentially a state transition model, recognizing and (ideally predicting) changes among states, I wanted to think a little more about some of the interrelationships within the system and possible changes.

The first iteration is shown below. Where sediment supply exceeds transport capacity, the key question is whether there exist opportunities for alluvial storage in channels, subchannels or abandoned channels (oxbows, sloughs, etc.), or floodplains. If so, aggradation occurs. 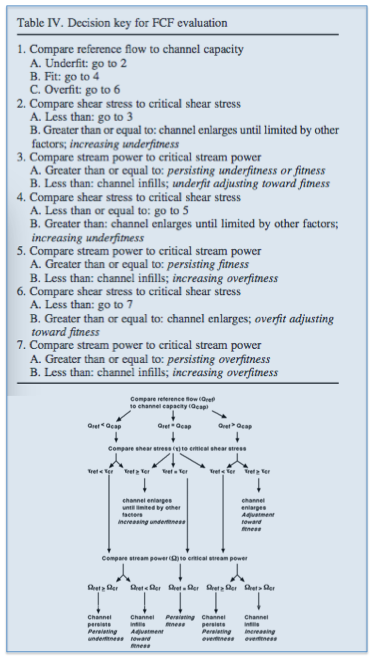 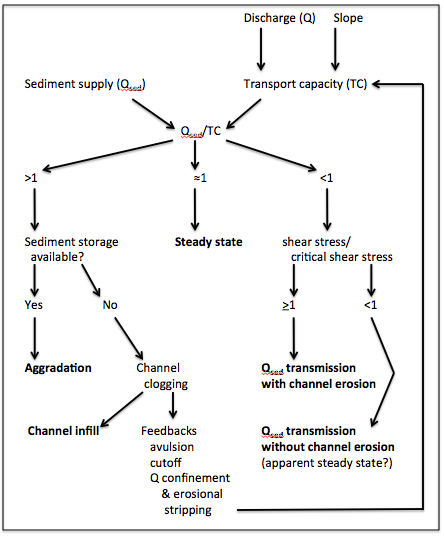 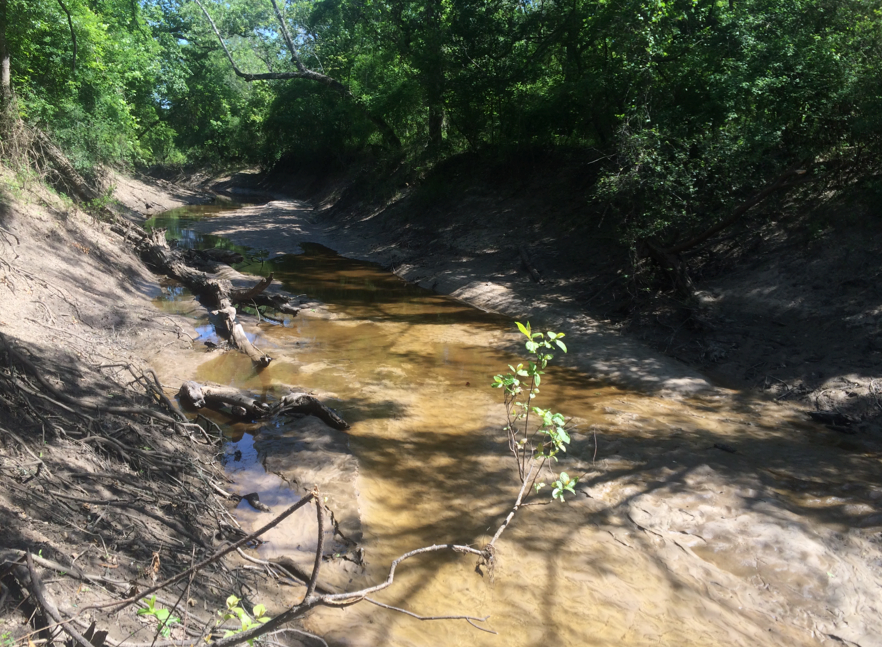 If insufficient storage is available, the channel begins to clog with sediment. This can be the first step of infilling, or can trigger feedbacks such as avulsions, cutoffs, or situations where increasingly large flows are confined within ever-higher banks until thresholds are exceeded and erosional stripping occurs. If sediment supply is less than transport capacity, the available sediment is transported through the reach, either with or without channel erosion, depending on whether the mean boundary shear stress of flow exceeds the critical stress for channel and bank erosion (this also applies to aggradation with or without erosion, but I didn’t want to make the flow chart too busy at this point).

True steady state in alluvial rivers is rare and transient, but a situation with no significant net erosion or aggradation can appear to be in steady state. 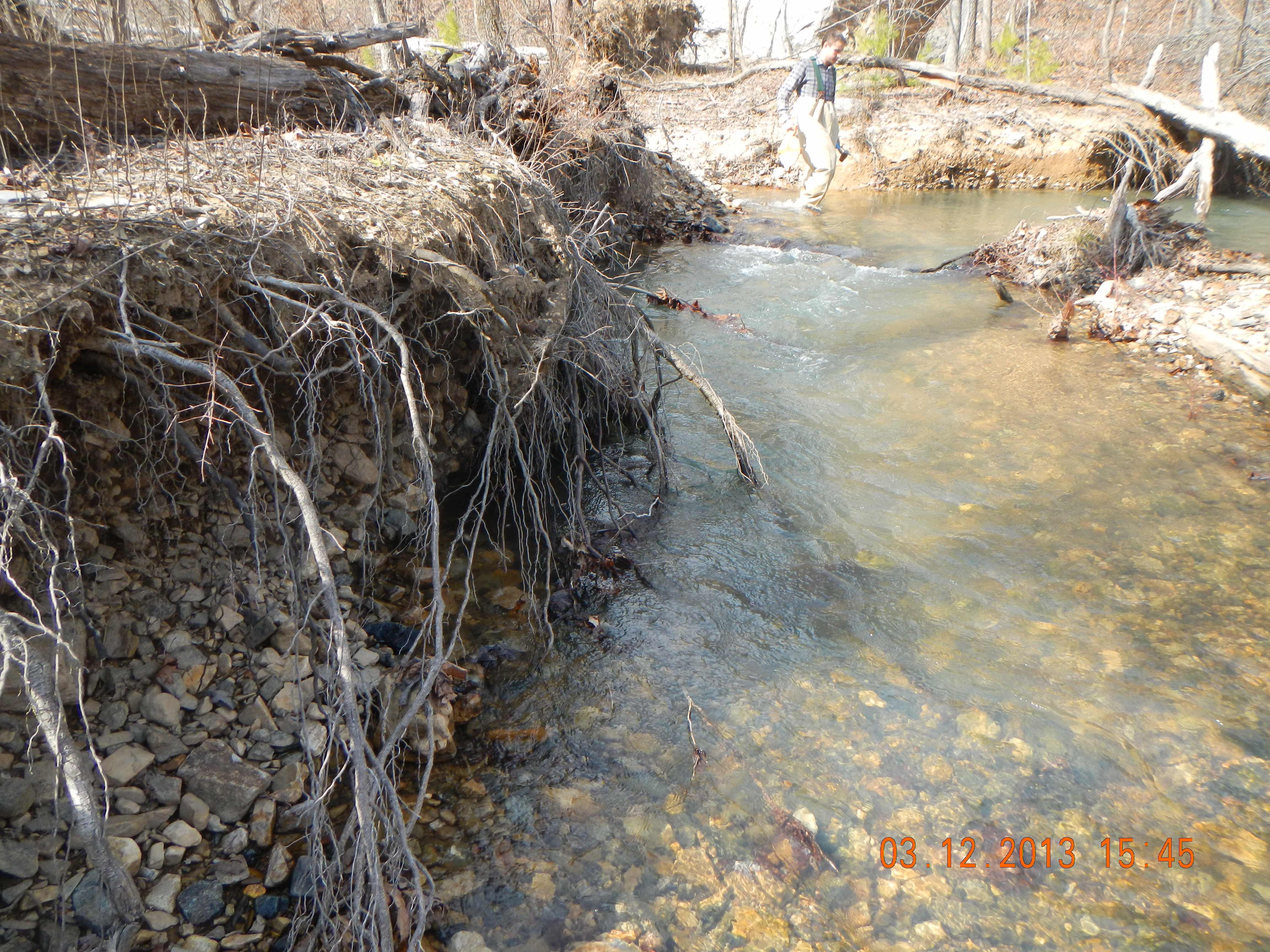 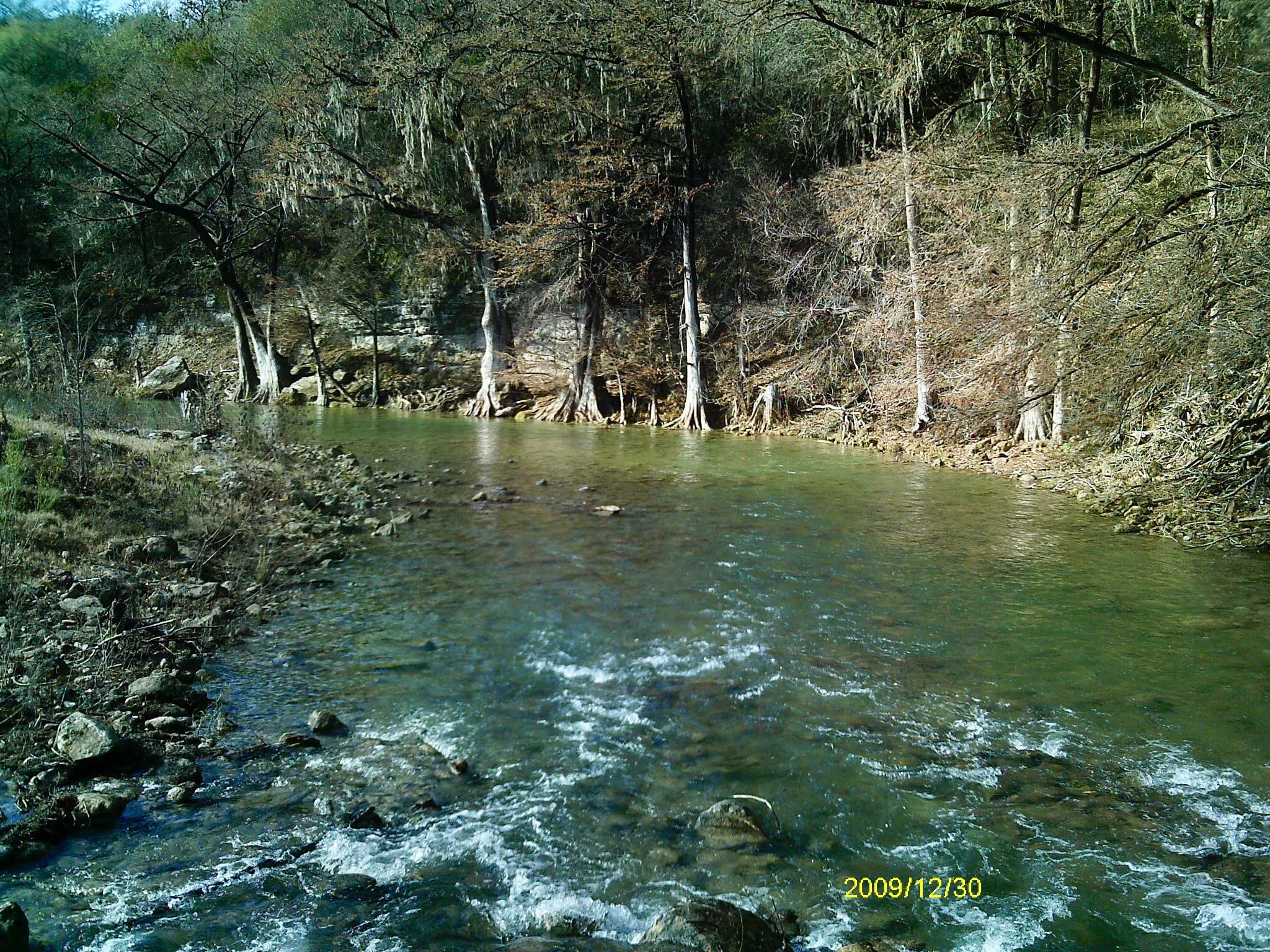 Now let’s think about what aspects of the system are most likely to change as a result of external (to the fluvial system) factors such as climate change, sea-level rise, dams, flow diversions, and modifications to watershed runoff and erosion due to climate, land use, or vegetation change. These are highlighted below. 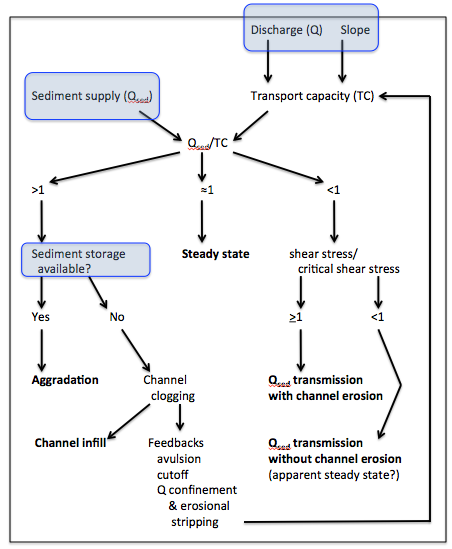 But wait. Aggradation can occur without or with channel erosion (for example, point bar/cutbank pairs on meandering alluvial rivers. 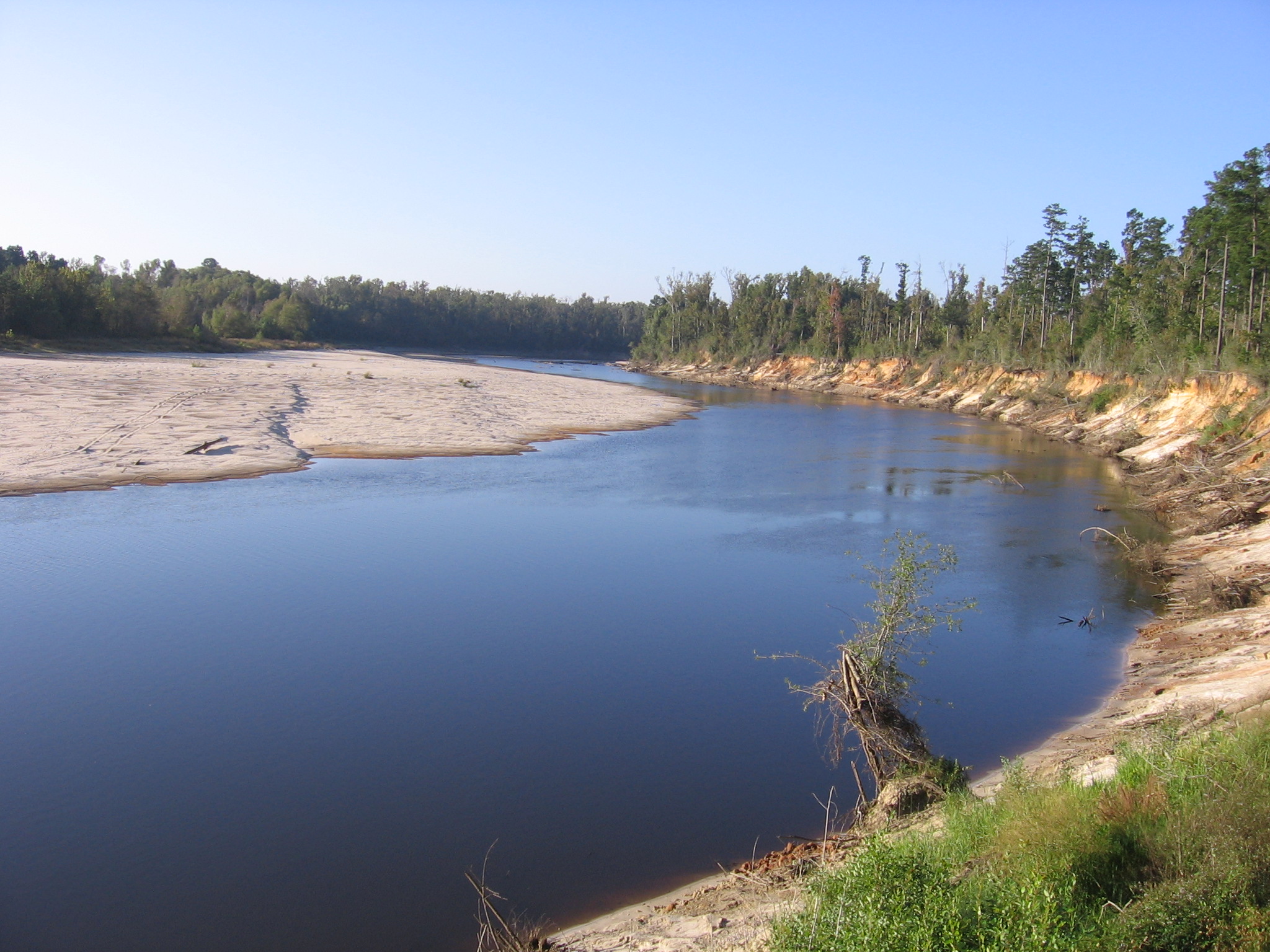 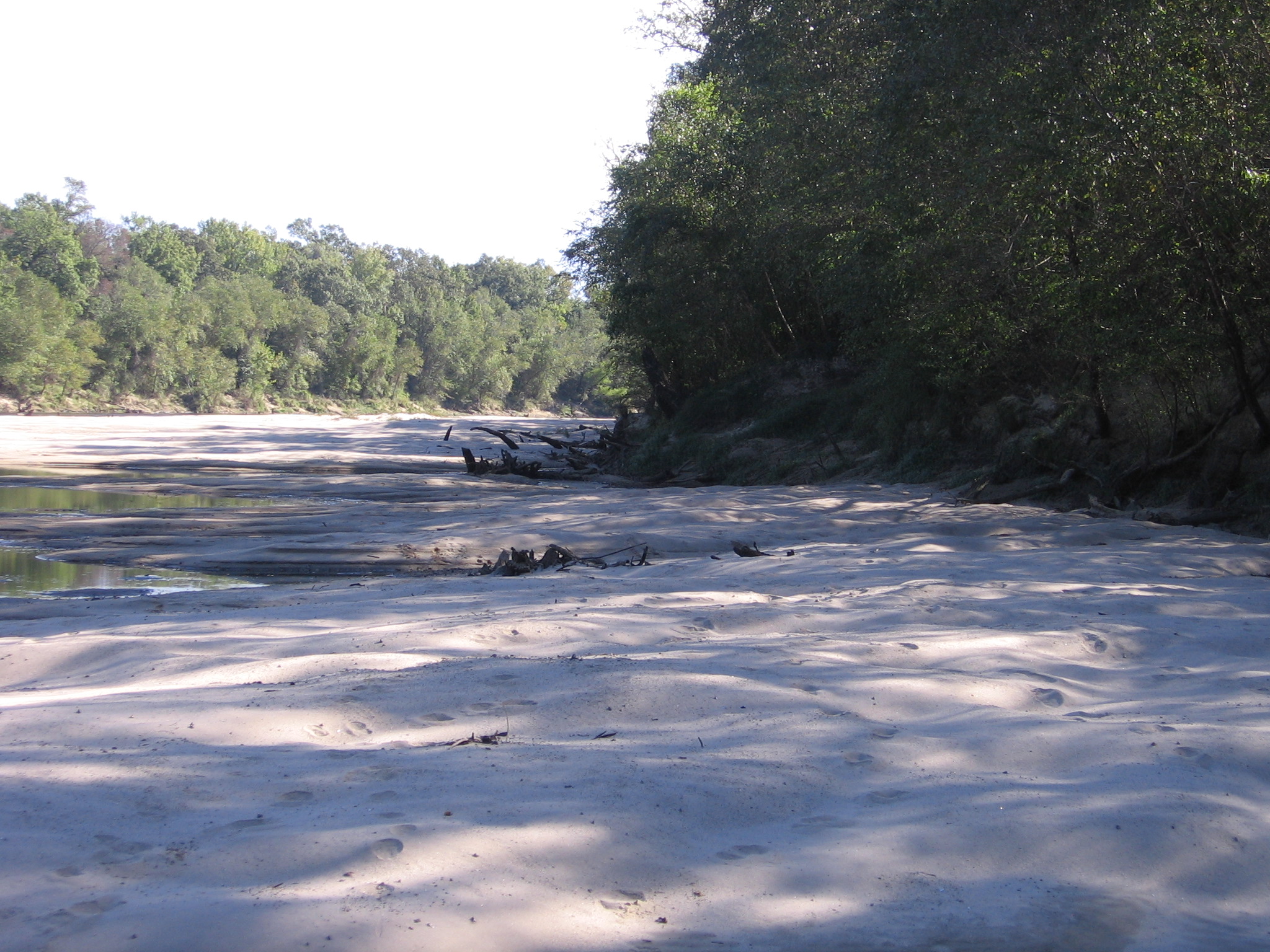 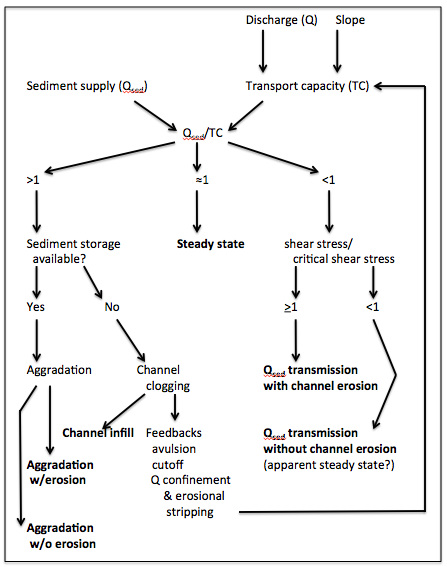 Channel evolution model 2.0, including aggradation with or without erosion.

But wait. Again. We have not considered the internal feedbacks in the system. The version below includes some of these. Eroding channels as well as cutoffs and avulsions affect sediment supply. Aggradation influences sediment storage capacity, and channel erosion affects the shear stress ratio on both sides—by modifying channel geometry and thereby affecting shear stress, and by potentially exposing materials of differing resistance (and also removing or modifying bank or channel vegetation or debris). This is reflected below. 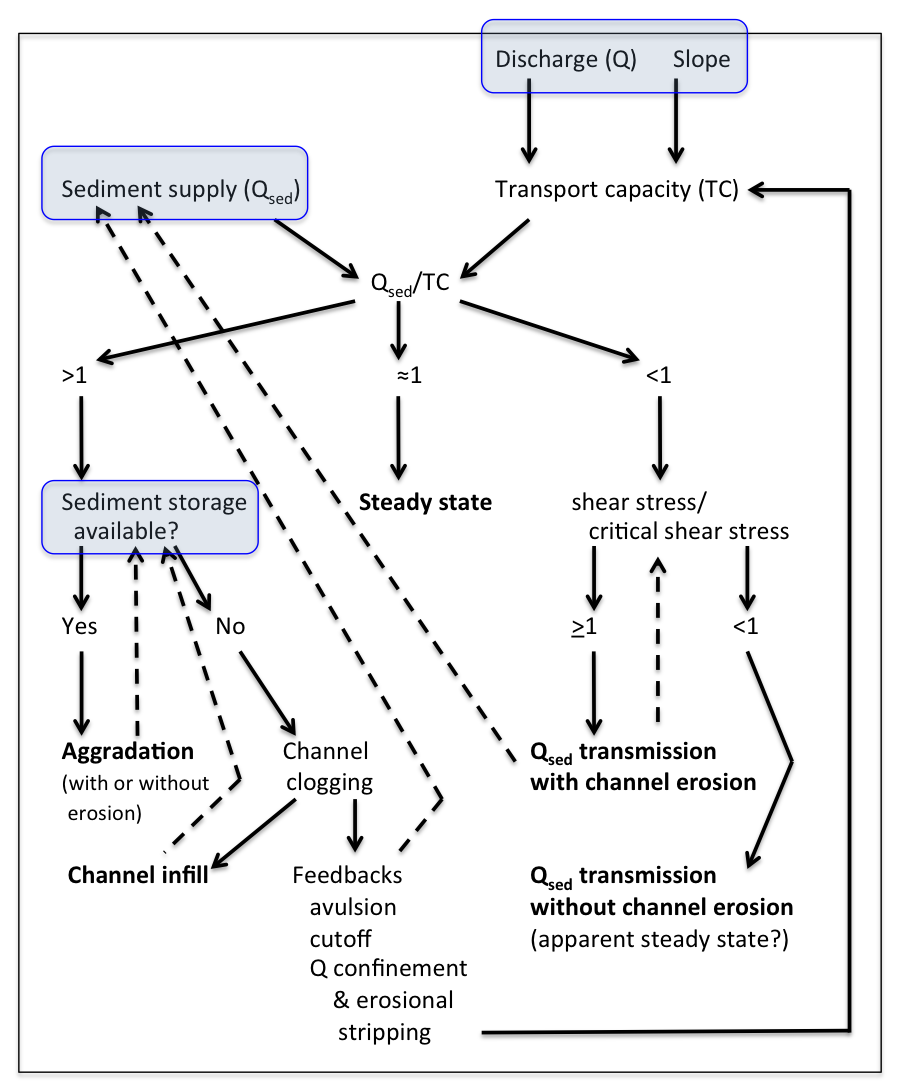 So what now? Where do we go from here? I don’t know, at least not yet. I am putting this out there in hopes that it may help others think this through, in case I don’t get around to pressing it forward.