Juncus romerianus or black needlerush is a graminoid plant that grows in coastal marshes from Virginia down the southeastern coast and around the Gulf of Mexico to Texas. It has high salinity tolerance and is often found in salt marshes, but can grow in near-about fresh water and everything in between. It has no direct, consumptive economic use that I know of (though in pre-industrial times it was used as a needle; hence the common name). However, anecdotal evidence from my neck of the woods suggests that it is highly resistant to erosion and perhaps a good candidate for “living shoreline” erosion control and wetland restoration. 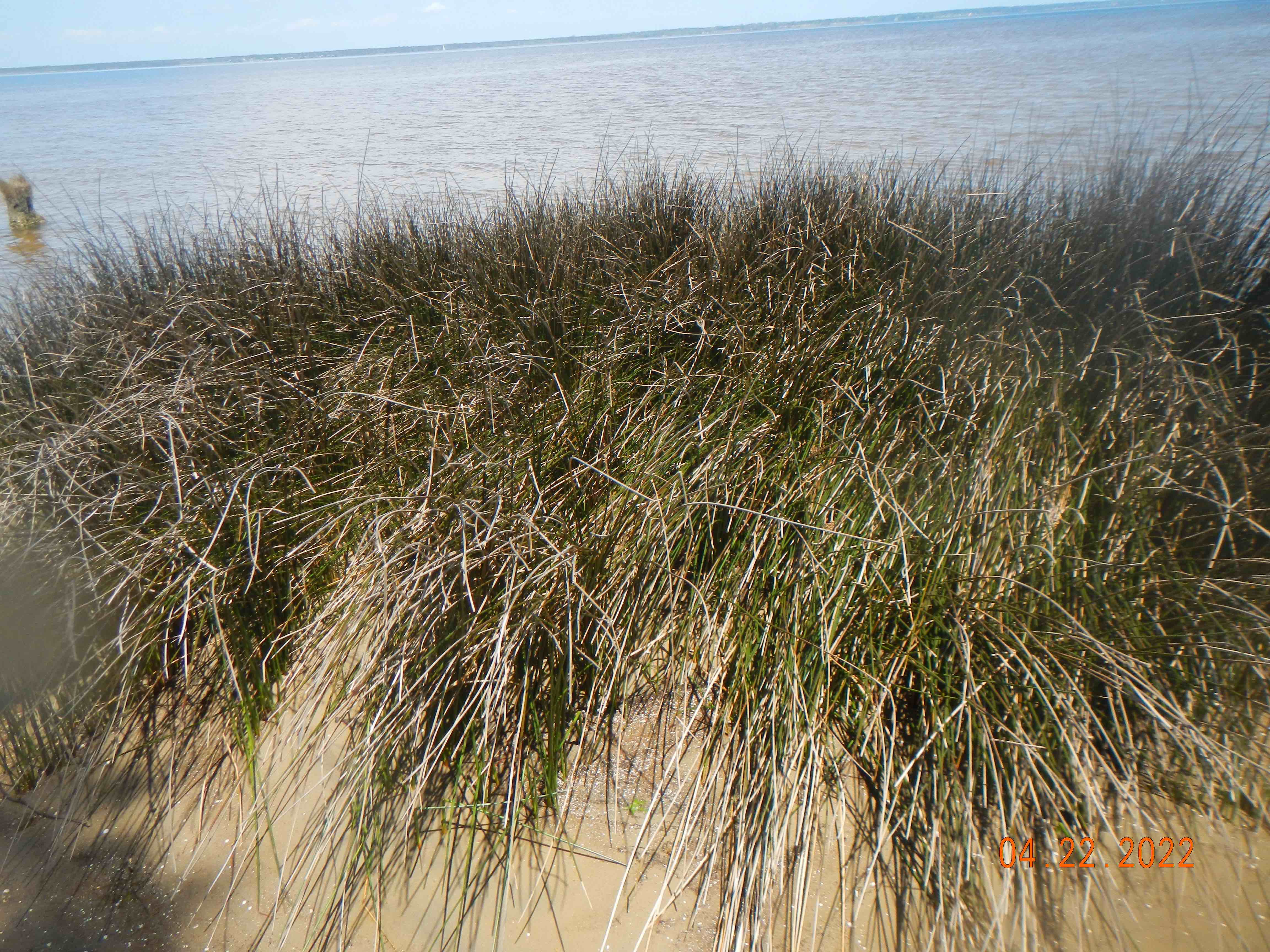 Juncus roemerianus near my house.

A quick-and-dirty literature search didn’t turn up anything on marsh fringe erosion or erosion resistance focused on needlerush, though there is plenty of field and experimental evidence of its efficacy in trapping sediment and promoting deposition. I have seen it eroded away where it becomes undermined, and the surface layer it is rooted in collapses.

However, anecdotal observational evidence shows that it is quite resistant to erosion, often persisting even as adjacent coastal landforms and vegetation is eroded away.

The evidence comes from the Neuse River estuary, North Carolina. One example is at Fisher’s Landing near New Bern. The three photos below show three small patches of Juncus romerianus before, immediately following, and about a year and a half after Hurricane Florence in September, 2018. In the first of the sequence the Juncus patches (which according to Google EarthTM images had been there for at least 20 years previously) are highlighted by rectangles. Note the end of a granite boulder rip-rap at the bottom. The second is from a few days after Hurricane Florence. While the approximately 10 m tall bluffs have retreated 10 m or more laterally, the needlerush patches remain (the middle, small one is hard to see in this image, but it is there). And they are still there in the later image. Note that you can’t infer too much about the beach widths shown. Water levels here are highly sensitive to wind, with water levels going way out during strong SW winds, and coming way up in strong NE winds, so visible changes don’t necessarily reflect any erosion or accretion. The middle image does show a temporary increase in beach width due to onshore transport of sand during Florence, and sand added from erosion of the adjacent bluffs. The new wide beach was gone in two years. 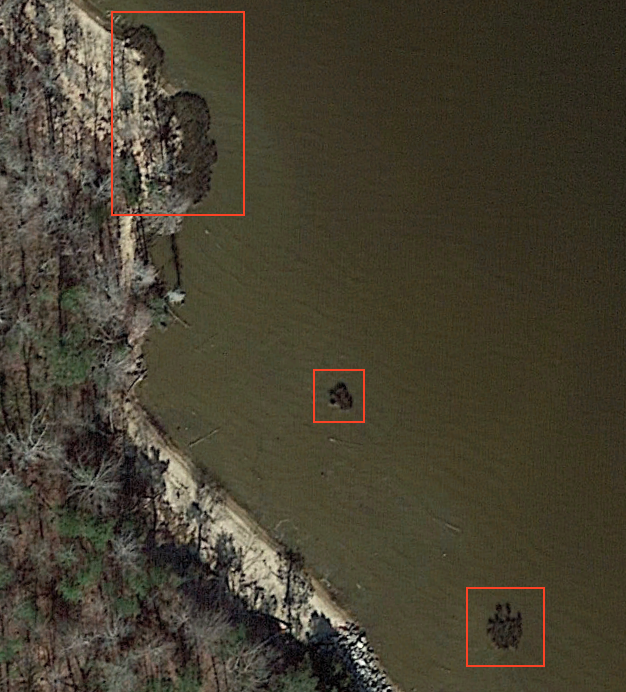 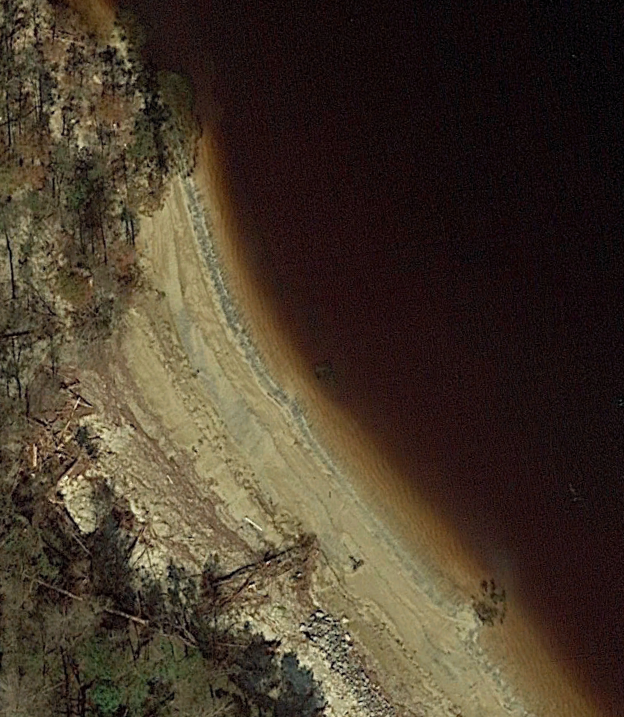 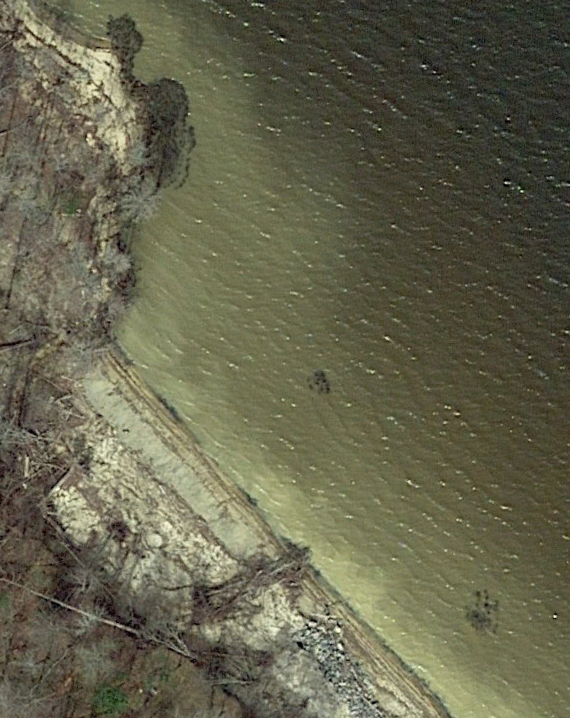 Now we go downriver a few km to a patch of Juncus near my house. It has been there since at least 1985 (the earliest photo I could find with sufficient resolution). I have personally observed it since 1990, and it never appeared to casual observation to significantly increase or decrease in size. I recently measured it with a survey tape; its area was right at 26 m2. I am not confident comparing field measurements to areal measurements from imagery, but if anything, the size of the patch has increased. Estimates using Google Earth’s polygon measuring tool on images from 1993 to 2019 give results of about 15 to 22 m2. 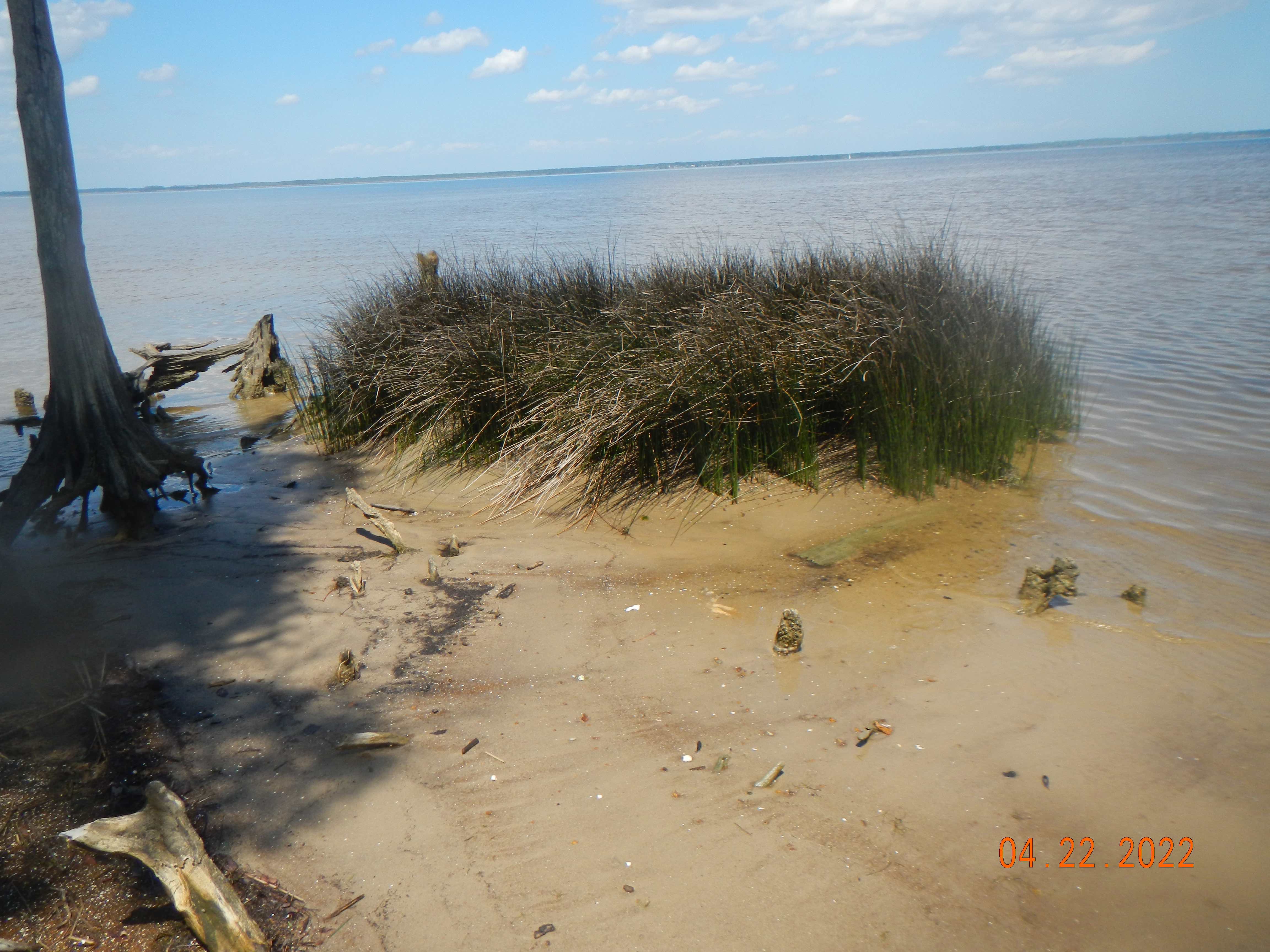 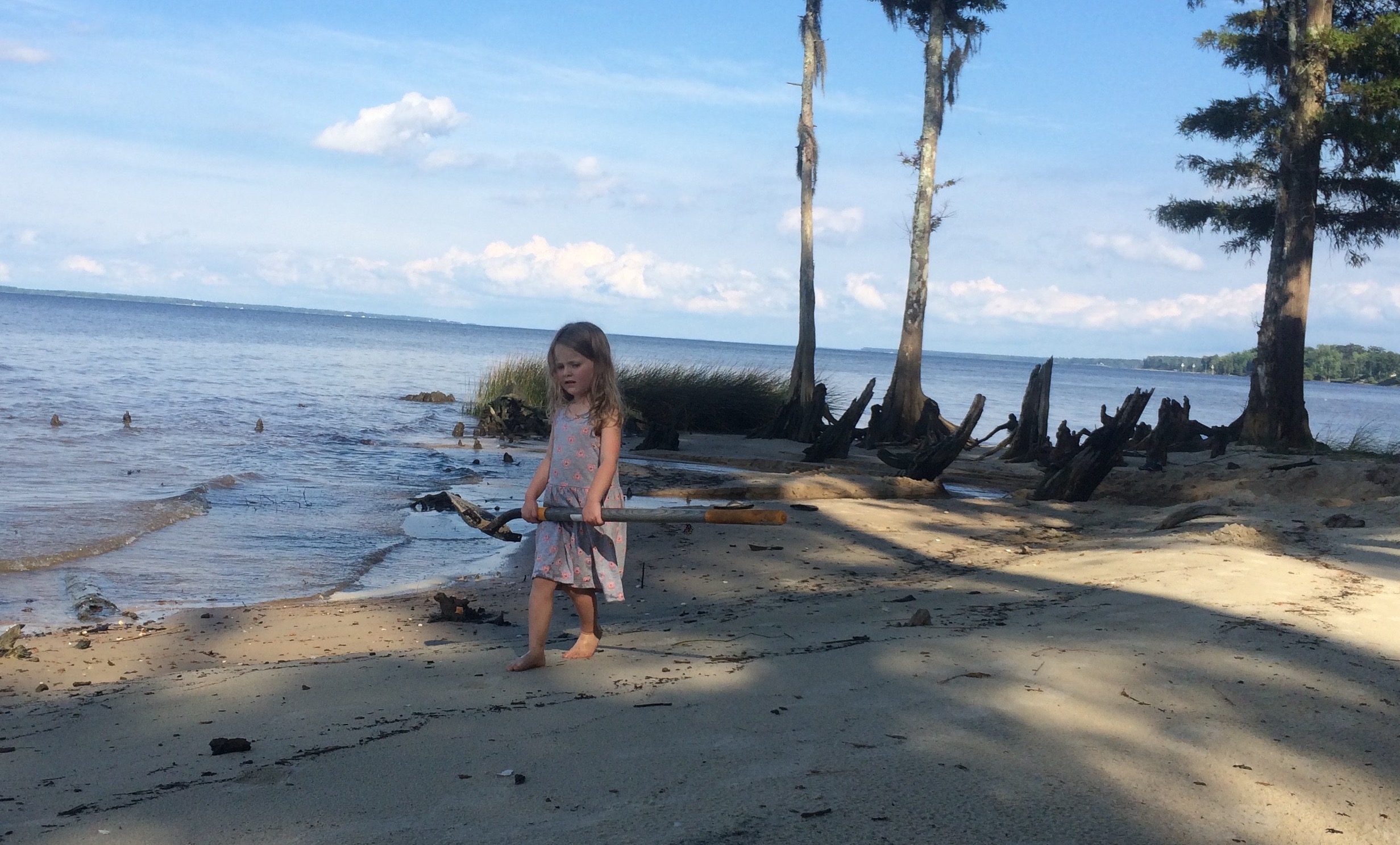 The needlerush patches survived Florence, but during the phenomenal 4 m storm surges then the Juncus was totally submerged. But they survived battering during the rise and fall of the storm surge, and at least seven other hurricanes, and countless northeasters. Nearby (within 30 m) dense patches of sawgrass (Cladium Jamaicense) were wiped out by Florence, and the common reed (Phragmites australis)—a famously, some would say notoriously, resistant marsh plant--that replaced it has been eroded back in subsequent northeasters, As the needlerush can obviously resist erosion, it raises for me the question of why the patches have not been able to expand to any great extent. 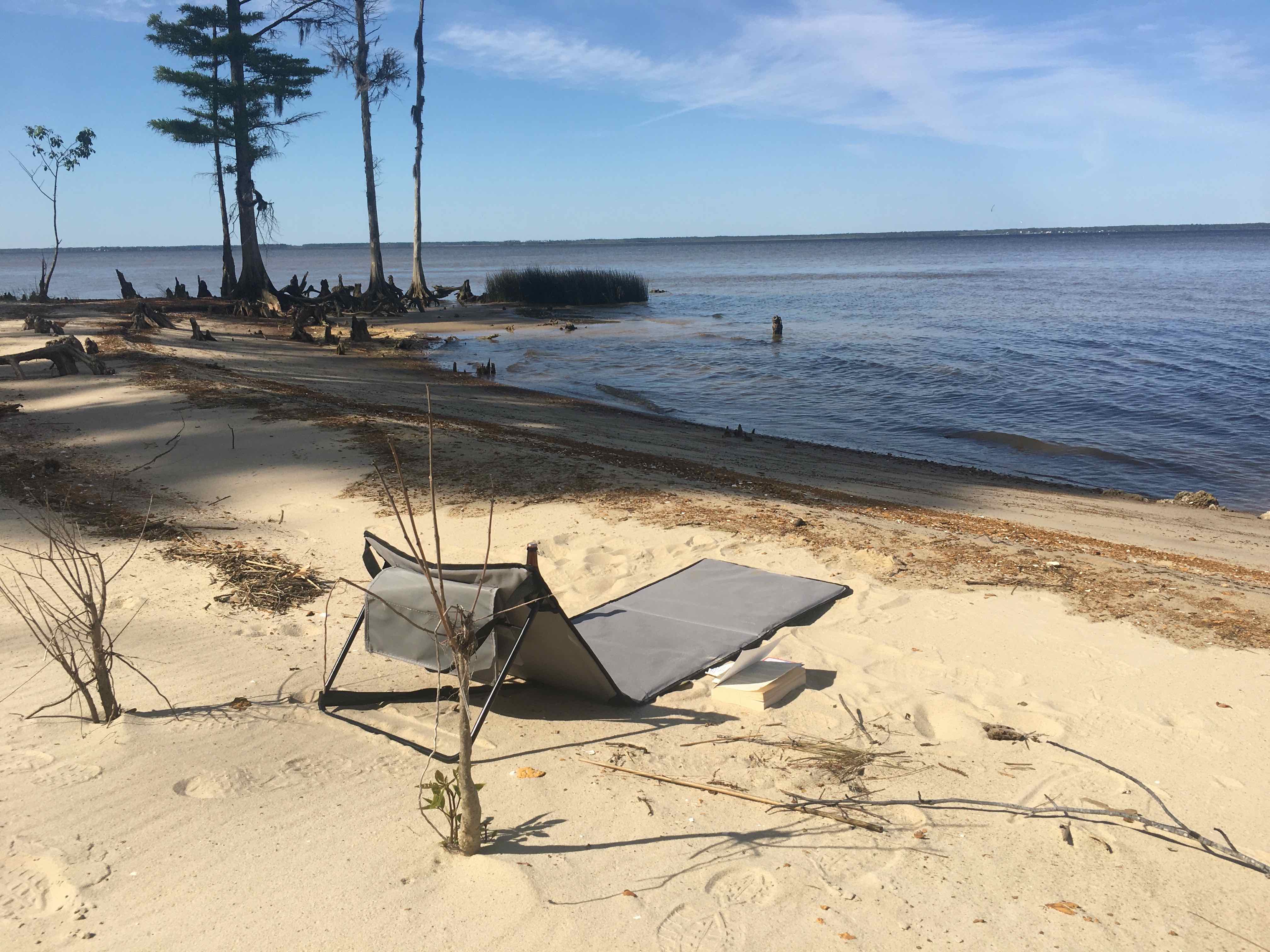