Spoiler alert--the answer is: maybe, but I’m not sure.

Argillic horizons are subsoil layers that are enriched in silicate clays. I have long been interested in soil morphology as it relates to argillic horizons. First, it was with respect to soil erosion. As these horizons are by definition formed below the surface, their exposure at or near the ground surface indicates removal of overlying soil. To the extent soils have a characteristic depth, or range of depths, to the top of the argillic horizon, then variations in DTA (depth to argillic) can indicate erosion or deposition. I used this to study soil erosion in the North Carolina coastal plain and piedmont in the late 1980s and 1990s, and in the Ouachita Mountains of Arkansas in the 2000s and 2010s. 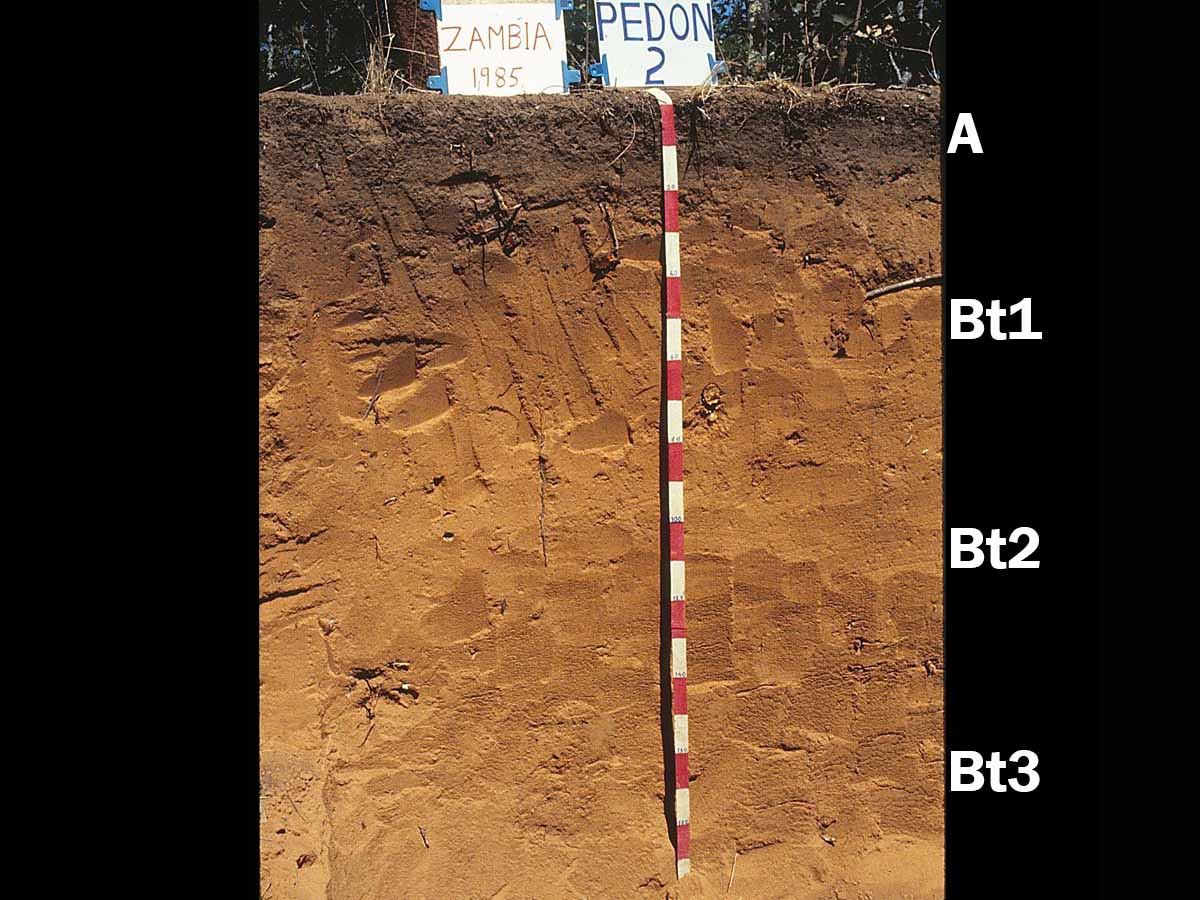 Multiple argillic horizons in a Kandiustult in Zambia (source: https://www.uidaho.edu/cals/soil-orders/ultisols).

Soils with argillic horizons, by implication, are vertical texture contrast (VTC) soils, where coarser surficial horizons overlie finer-textured subsurface horizons. Such soils, also called duplex soils, are globally common. Along with the erosion work, my studies of soil geomorphology, geography, and spatial variation piqued my interest in how and why argillic (often designated as Bt) horizons and VTC soils develop.

The conventional explanation is that they form due to vertical translocation by percolating water. This water physically washes smaller particles out from between the larger ones (often sand grains) and moves them downward, concentrating smaller, clay-size material in the subsoil. This process is called lessivage or argilluviation. The water can also dissolve material from the upper layers which precipitates in the subsoil.

Vertical translocation by water most definitely occurs, and is in my opinion the single most important process for creating VTCs. But it is far from the only one! Preferential erosion of finer and/or deposition of coarser sediment at the surface can get the job done. Bioturbation often plays a key role, and texture contrasts can by partly or wholly inherited from parent material layering. In-place weathering and clay synthesis can produce silicate clays in subsoils, and upward movement of groundwater can lead to precipitation in the B horizon. 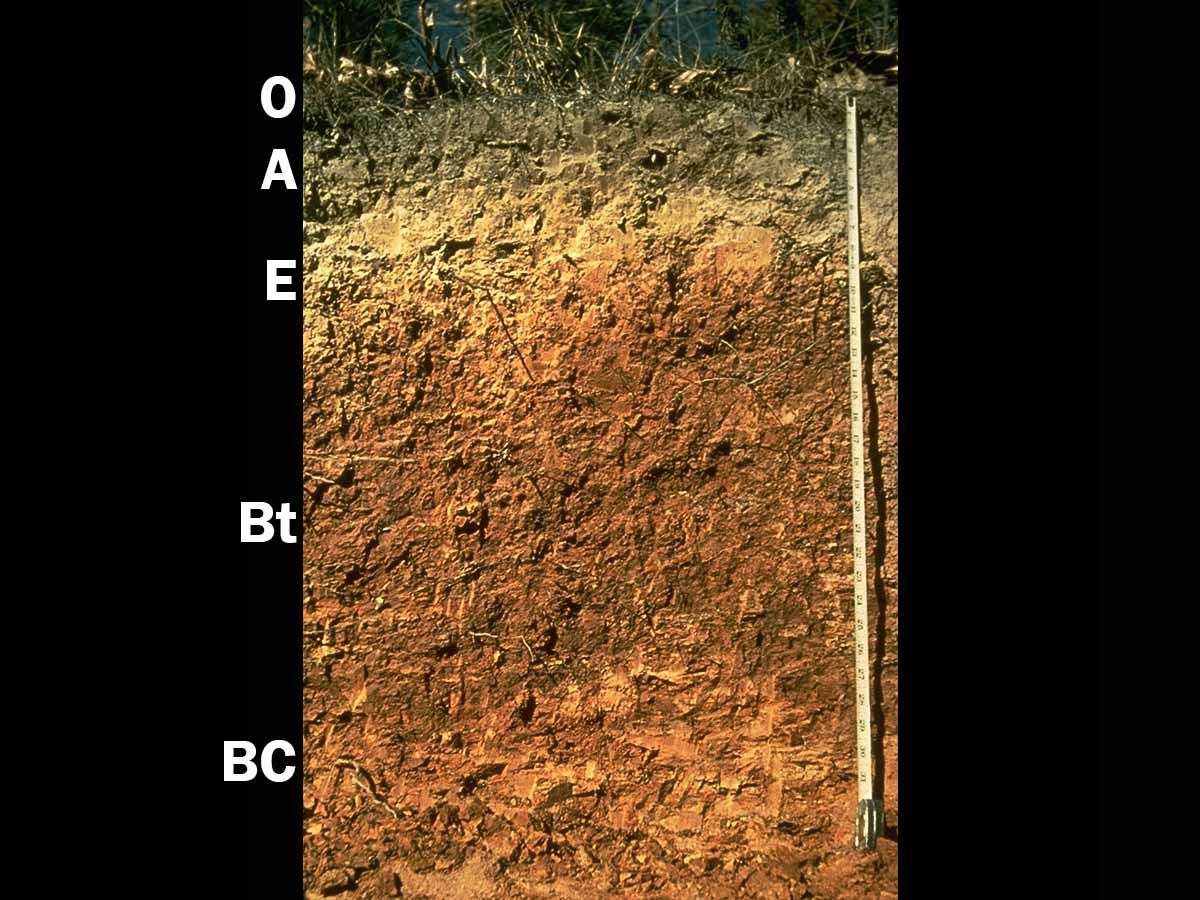 Three things in particular spurred my interest. One was my own findings of variations in DTA over short distances and small areas that could not be explained by any measurable variation in soil forming factors. This suggested to me that either something else in addition to vertical translocation by water was going on, and/or that the translocation process is characterized by complex, perhaps even deterministically chaotic, dynamics. Second was a series of papers from 1987 on into the 2000s by Don Johnson and colleagues showing the strong but often, at least traditionally, overlooked role of organisms in creating and changing soil morphology (e.g., Johnson, 1990). The third was the book Soils: A New Global View by T.R. Paton, Geoff Humphries, and P.B. Mitchell (Yale University Press, 1995).  In this book they challenged the prevailing approach to pedology, favoring a more geological and geomorphological viewpoint. They also specifically challenged the notion of vertical translocation by water as a ubiquitous factor in soil formation. I did not, then or now, buy all their arguments, but they definitely made a strong case for rethinking the conventional wisdom.

So, from 1993 to nearly the present I was involved in, and published a number of papers on, how VTC soils and weathering profiles are formed, complexity in pedogenesis, spatial variation of soils, and coevolution of soils, landforms, and ecosystems (shameless plug: See my book Landscape Evolution. Landforms, Ecosystems, and Soils, Elsevier, 2021). 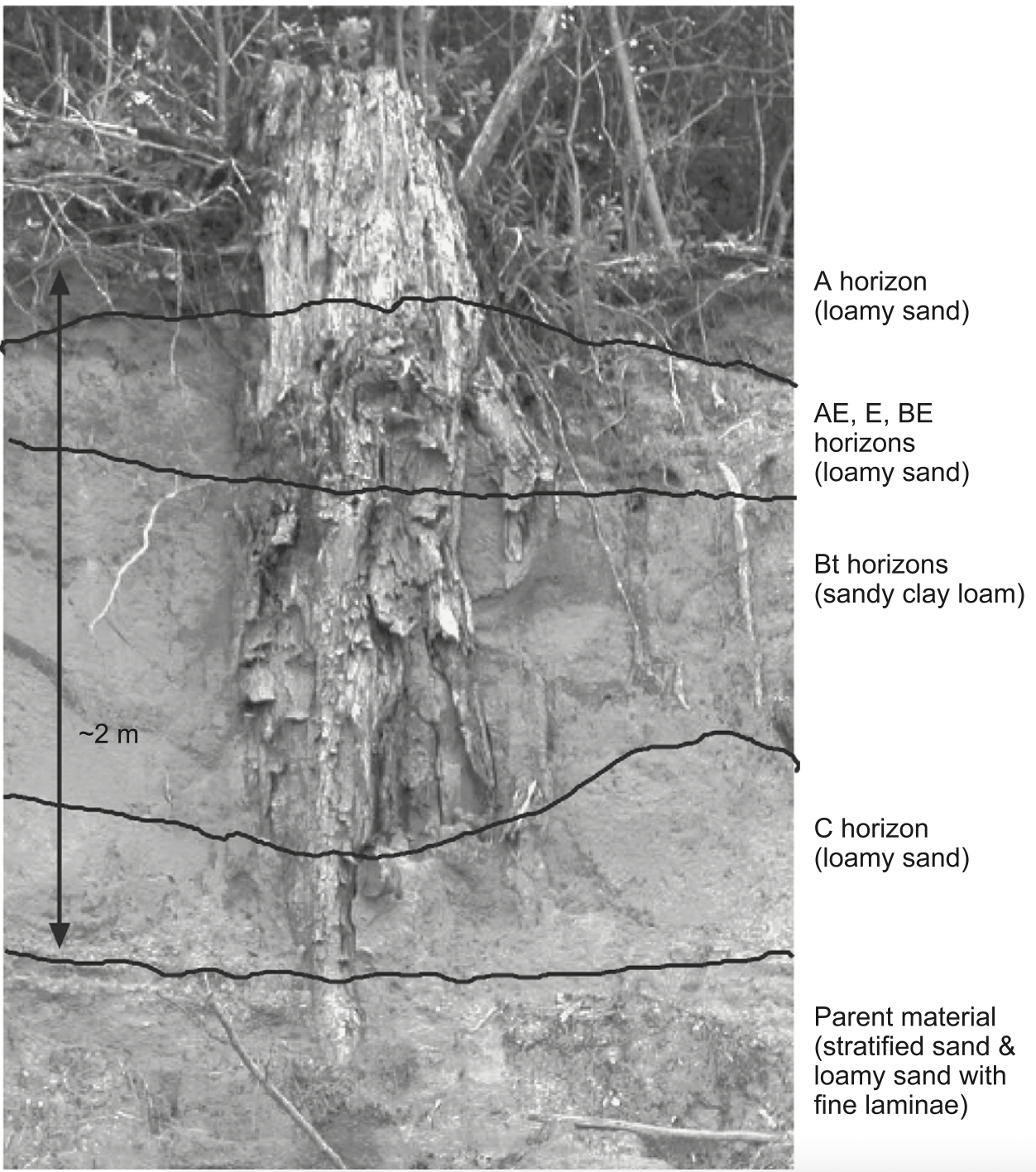 Soil profile from the North Carolina coastal plain (from Phillips, 2004).

Now cut to the 2010s. I come across an article by William Verboom and John Pate (2013) on ecosystem engineering of soils by eucalyptus trees in western Australia—including the synthesis of clays in the root zone! This led me to some of their earlier work showing that vertical redistribution of water and minerals dissolved therein resulted in formation of dense clay layers. The lateral root systems of the trees were, in essence, forming a subsoil clay layer by bringing the raw materials for clay synthesis into contact with each other. Because these clay-rich horizons benefit the trees via their water and nutrient storage, this is an example of positive ecosystem engineering. Thus, in at least one environment, trees and woodlands, if not forests sensu stricto, can build claypans and argillic horizons. Could this be a more general phenomenon?

Around the same time, I recalled something I had read earlier in Greg Retallack’s masterful Soils of the Past (3rd ed. 2019, John Wiley)—that soils with argillic horizons (Alfisols and Ultisols in the U.S. Soil Taxonomy) do not appear in the paleosol (fossil soil) record until forests appeared in the Devonian. Coincidence? Unlikely. Deeper rooting depths of trees and effectiveness of weathering under forests likely play a role, but Retallack also noted the strongly tapering geometry of tree roots. These create large pathways for water movement in upper parts of the soil that taper down to nearly nothing at their tips, allowing translocated material to move down, but to start building up at the end of the root line, so to speak. This is broadly consistent with my own work, which showed that tree roots (and root paths following death and decay) and insect and other faunal burrows are important in maintaining translocation which might otherwise be reduced to negligible levels as low permeability clays accumulate and soil pores are blocked. 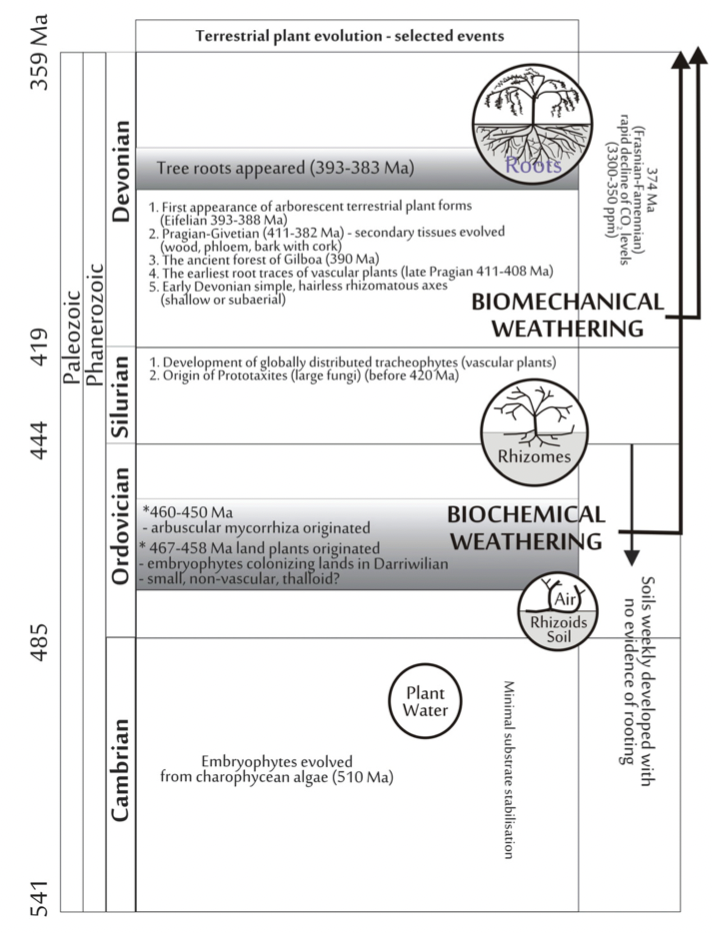 Admitting that much of the biochemical, geochemical, and mineralogical details are at the edge of or beyond my expertise, I have not found any work other than Verboom and Pate’s and some of their coworkers that directly address the question posed in the title. However, I did come across Pierre Velde and Pierre Barre’s book: Soils, Plants, and Clay Minerals. Mineral and Biologic Interactions (Springer, 2010). Velde and Barre come from a school of thought that I was not much aware of before, that soil clay minerals are fundamentally different from those formed below the soil or prior to soil formation by primarily geochemical processes.

Independently of this perspective, however, they show the role of plants and vegetation-based soil organic matter in the formation and retention of phyllosilicate clays, both directly and via their bacterial and fungal symbionts. Particularly important is plant uplift (via water intake) of silica and potassium, key building blocks of silicate clays. An important point is that clay minerals are a necessary source of the critical nutrient K (potassium), so facilitating the formation of clays that can retain K is of great benefit to the vegetation.

Without plants, Velde and Barre assert, there would be no clay accumulation in surface layers. However, their book does not directly address the “can trees make argillic horizons” question. First, they are concerned with plants in general, and grasses may be more effective clay-formers than trees, at least when it comes to clay in A horizons. Second, much of their work is indeed concerned with A horizon clay—it is in these layers that most root mass occurs, after all. They are less concerned with clay migration to the subsoil, though they do note that loss of clays from the surface layer is highly probable in forest soils. Finally, the book has more to say about retention of clays and clay minerals than the (flora-assisted) formation thereof.

In subtropical savannas of south Texas, there’s a body of work on vegetation relationships to soils that doesn’t quite fit into the trees-make-argillic horizons framework. Large woody patches occur on soils without argillic horizons, whereas smaller patches with more herbaceous vegetation is found in adjacent sites in the same landscape where an argillic horizon is present (Midwood et al., 1998; Zhou et al., 2017). This could occur because the clayey layers restrict root penetration, favoring more shallow rooted grasses and shrubs rather than trees. One study showed that shrubs on argillic soils had less aboveground and greater belowground root mass than those on non-argillic soils. Root biomass and density on argillic soils was elevated at shallow (< 0.4 m) depths, whereas root density of the same species on non-argillic soils were skewed to depths >0.4 m (Zhou et al., 2019). Obvious relationships exist between the presence or absence of argillic horizons, root depth and biomass, vegetation-driven water use (including hydraulic lift), and soil hydrological properties (Zou et al., 2005), and similar results have been obtained in Australia (Yunusa et al., 2002). However, this body of work does not make it clear (at least to me) whether soil morphology is driving vegetation distributions, or vice-versa—or both, via reciprocal interactions. It is also possible, I think, that the argillic horizons may be inherited from earlier, moister climates (this is sometimes the case even in desert Aridisols), and poorly related to contemporary pedo-ecological dynamics with respect to argillic formation.

Yes, they have been shown to do so in specific situations, but this has not been demonstrated as a widespread, general phenomenon in forests.

Yes, plant uplift of water, nutrients, and Si can help retain or even form silicate clays. But, this is not restricted to trees or woody vegetation, and does not necessarily result in subsoil clay concentrations.

Yes, argillic horizons are strongly associated with forest cover, or with environments where the natural vegetation cover is mainly forest. But, VTC soils do occur in other environments, and clay synthesis is not the only mechanism by which forest cover could facilitate argillic horizon formation. Also, while forest soils (other than Histosols or other wetland soils) typically show evidence of vertical translocation, argillic horizons (even incipient ones) are not always found—sandy Spodosols or podzols are a prominent example.

Yes, VTC soils with argillic horizons were rare or absent before the Devonian advent of trees. But, clay synthesis by the trees may not have played a major role.

Yes, forest cover clearly facilitates formation of argillic horizons. But, if sufficient clay-size material is present in parent material, it can become concentrated in a Bt horizon without any clay synthesis (by trees or otherwise) in the soil—some of my own work in coastal plain soils showed this (Phillips, 2007).

Yes, formation of VTC soils with argillic horizons plays a role in the formation of store-and-pour soil hydrology structures that are advantageous to plants. Any role of plants in creating such morphology would by positive ecosystem engineering and niche construction or reinforcement. But, this is something I am still working on and thus somewhat speculative at the moment.

Do forests build vertical texture contrast soils with argillic horizons? Evidence strongly supports the possibility. But we still need some specific case studies to show that it indeed happens, and to shed more light on how. I’m betting the answer is yes, and look forward to others proving me right—or wrong.

Phillips, J.D., 2007. Formation of texture contrast soils by a combination of bioturbation and translocation. Catena 70: 92-104.

Verboom, W.H., Pate, J.S., 2013. Exploring the biological dimensions to pedogenesis with emphasis on the ecosystems, soils, and landscapes of southwestern Australia.Geoderma 211–212, 154–183.