UK Athletes Excel Both Inside and Outside the Stadium

Each year, more than 500 UK students get involved through UK Athletics, programs that carry rich tradition. However, freshman Cailin Harris and sophomore Daniel Buckles took their involvement one step further, engaging in a program that upholds another aspect of the UK tradition — the UK Honors Program. 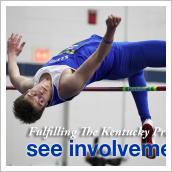 Buckles, a decathlete on the Men's Track and Field team estimated that he spends at least 20-25 extra hours per week between the two programs, unsurprisingly touting time management as the most important factor in balancing his commitments. However, he and Harris, a member of the Women's Soccer team, both said that this double involvement actually enhanced both programs — allowing them to gain skills from one program and apply them to the other.

"It can be really easy to make excuses in terms of grades, but the soccer program is an environment that responds to any mistakes with hard work," Harris said. "I think that translates really well to school. If I don't understand a concept, do I mope about it or do I go get extra help? Do I try to find resources that are going to help me get the grade I want? That is something that I have built up, in the short time I've been with this soccer program."

Buckles said that the practice required to excel in the various aspects of his sport — sprinting, jumping, hurdling and throwing — align with the interdisciplinary demands of the Honors Program.

"Through my competition in the decathlon, I devote every day to trying to become the most well rounded athlete I can be through the event’s various disciplines," Buckles said. "Likewise, the Honors Program encourages me daily to become a more well rounded student by reaching beyond my major’s classes and into a wider range of studies."

This holds true for both athletes. Both biology majors, their Honors classes grant them the opportunity to think out of their "normal science box," as Harris put it. Her first Honors class centers on philosophy.

"I tend to get active in a lot of programs, because I'm naturally interested in a lot of things," Harris said. 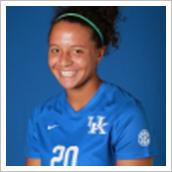 The two athletes also credited their support systems, both from Honors and Athletics, as mutually helpful.

"The groups provide two levels of accountability," Harris said. "On the team, we emphasize strategy and discipline and heart; in Honors we talk about ideals and philosophy, and those are different parts what makes up one person. So, I have people on one side that are pushing me to work harder, and people on the other side that are challenging me to think differently. In both cases, I'm growing as a person, and that's going to help me in both programs."

Brad Hubbard, academic advisor in the UK Honors Program, said the two students are a source of pride for the program.

“We are extremely proud to have Cailin and Daniel in the Honors Program," Hubbard said. "To challenge themselves academically requires significant inner strength and confidence. The fact that they are also choosing to challenge themselves athletically really speaks to the strength of their character. We look forward to the successes of these two Honors athletes in sport and in class.”

Harris, less than a month into her first semester, is still settling into her two-fold role of Honors student and student athlete, but she said that she is excited to begin classes, and has already felt, as Buckles describes as well, enormous support from both programs.

"My Honors professor of two semesters, Dr. David Wilke, frequently asks about my training and competition, while my track coaches are always there to support me academically," Buckles said. "It helps greatly to have coaches, peers, and professors who genuinely care about your success."

As Buckles enters his second year wearing both hats, he conceded that the prospect of immersing himself in two demanding programs was daunting at first, but that the rewards he has already experienced vastly outweigh the time commitment.

"Both participation in the Honors Program and being a decathlete have gone hand-in-hand when it has come to being the best student-athlete I can be," Buckles said. "Between the two programs, I have found UK a great university to unleash my full potential as both a student and an athlete."