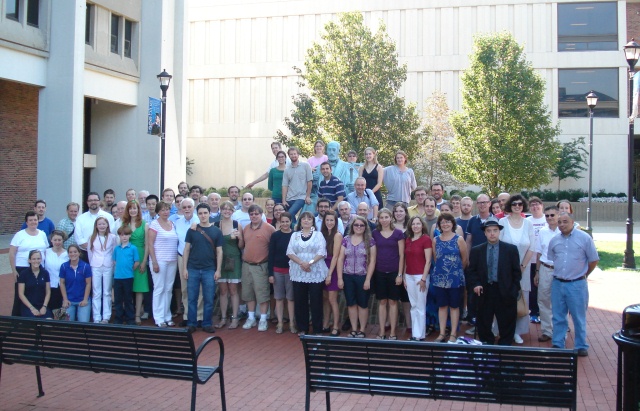 This past summer marked the 16th anniversary of one of the world's most unique events held on UK's campus.

The Conventiculum Latinum Lexintoniense, an active Latin immersion seminar established and directed by classics professor Terence Tunberg, annually draws scholars from across the globe. The seminar aims to fully immerse participants, equipped with various degrees of fluency, in the Latin language and culture — and does so by instating a pledge to speak exclusively in the ancient language throughout the duration of the seminar.

"At the very first session, all members signed a pledge to speak only Latin during the conventiculum," Richard Smith, professor of classics and honors at Franciscan University of Steubenville said, having participated in the seminar. "We largely kept the pledge, conversing in Latin at breaks, meals and even in the locus secretus."

The seminar consisted of six or seven sessions a day, with one always held in the evening, followed by games, conversation and singing.

"We were drilled on grammatical constructions, or had to take down dictated stories, and then answer questions on them," Smith said. "At other times, stories which incorporated words from attached vocabulary lists (forms of greeting, the weather, food, clothing, housing and furnishings, and the like) were distributed. Then each student in turn would read a sentence or two from the story, and summarize the bit read in Latin."

Leni Ribeiro Leite, classics professor at Universidade Federal do Espirito Santo in  Brazil, also participated in the seminar and said that she enjoyed the variety of activities.

"Even though we did have some relaxing and fun events, those usually took place in the evenings," Leite said. "During the day we concentrated on the different materials prepared by professor Tunberg and sent to us by email in advance. That doesn’t mean we didn't have fun in the sessions themselves, of course, but it was a very intense (and profitable) study experience, while other seminars have been organized to be more similar to vacations than to classes."

Leite said that her interaction with international scholars was also greatly beneficial.

"Being a professor myself, and working directly with the teaching of Latin language and literature at the college level, listening to other teachers’ experiences, during the lectures or just chatting over lunch, has brought me new ideas I have implemented in my classroom and has made me think about the way I teach in different ways," Leite said.

Tunberg and classics professor Milena Minkova, director of graduate studies in the Division of Classics, use many of the same active Latin techniques in their classes, through the UK Institute for Latin Studies. This series of graduate courses focuses on Latin literature and language, emphasizing command of the Latin language in reading, writing and speaking, along with a wide exposure to the cultural riches of the Latin tradition in its totality.

"There is explosion in the interest for Active Latin in U.S.," Minkova said. "Teachers and professors find the same active methods that are used in our UK Institute for Latin studies, of great use in their classroom."

As interest in the subject continues to climb, the seminar remains as a testament to UK's excellence in the discipline.

"Through the conventiculum the department is reaching all over the globe, and is influencing Latinists of every age (even children), who will always remember UK fondly, and inculcate the principles learned there in their own students and children," Smith said.

To listen to a podcast, produced by the College of Arts and Sciences, in which Minkova describes the Institute for Latin Studies, the unique methods used to teach Latin to students in the program, and the value of the Latin language in today's world, click here.