Having recently secured a $1 million grant from the National Institutes of Health (NIH), Morris will continue investigating zebrafish and the insight they offer in regard to solutions for human retinal degeneration. The NIH grant, titled, “The role of insm1 in vertebrate photoreceptor differentiation,” will be funded over five years and focuses on zebrafish to better understand genetic pathways that control the development of the retina. 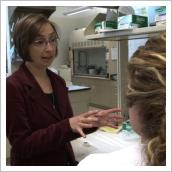 "Mammals cannot regenerate photoreceptors, because the retina is part of the central nervous system, and like other neurons in the brain, when you damage them you can't replace them," Morris said. "So that means when people get genetic diseases where the neurons, particularly the photoreceptors, start to die or to degenerate, there's no way of replacing those cells, so eventually they go blind. While that's true for mammals, it's not true for fish. Fish can regenerate photoreceptors." 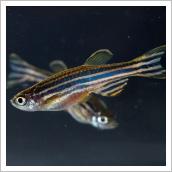 "One reason that we can do this, say that what we learn about fish will help humans, is because the structure of the retina and types of cells that you find there are very well conserved between fish and humans," Morris said. "That means that throughout evolution in all of the vertebrates, to which fish and humans both belong, there is a very similar structure to the retina. The same types of cells are found in the retina and the same types of genes control its development in both species. So what we learn in a fish can potentially be applied to what we know about humans."

Morris began her work with photoreceptor cells in fish before coming to UK. Using a technique called gene expression profiling, she identified a list of genes to investigate in regard to their role in photoreceptor regeneration. Once at UK, she and her students began working through this list to determine which genes were influential in the production of photoreceptors.

"We are particularly focusing on a gene named 'insulinoma-associated 1,' or insm1," Morris said. "We have recently shown that it plays a role in photoreceptor developments, and this grant will allow us to investigate it's precise function further and to learn more about all the genes regulated by Insm1 that are also required in making photoreceptors."

The grant will also allow Morris, in collaboration with a lab at Northwestern University, to extend the study to mice and determine if insm1 is interacting with the same genes to make mouse photoreceptors. This would bring the study one step closer to human implications, because mice are also mammals.

The funding period began on Aug. 1, 2012. Morris said she is very excited to see the findings that her lab unveils.