(April 9, 2014) — University of Kentucky Libraries will bestow two prestigious awards at its annual dinner this weekend. Noted cultural geographer and a former Provost's Distinguished Service Professor in the University of Kentucky Department of Geography Karl Raitz will receive the 2014 UK Libraries Award for Intellectual Achievement. UK Libraries will also recognize its Paul A. Willis Outstanding Faculty Award winner, Tari Keller. Both awards will be presented at the dinner scheduled for April 11, at Griffin Gate Marriott. 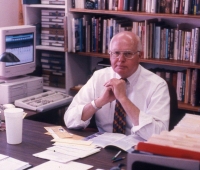 The UK Libraries Award for Intellectual Achievement recognizes high intellectual achievement while encouraging education and promoting creativity throughout the Commonwealth. Candidates must have been born in Kentucky or studied, worked or lived in Kentucky for at least three years and have demonstrated intellectual excellence in a scientific, artistic, literary, social or humanitarian venue or have produced some original work or contribution of lasting value. The recipient is determined by majority vote of the UK Libraries National Advisory Board. Past winners of the UK Libraries Award for Intellectual Achievement include Wendell Berry, James Still, Bobbie Ann Mason, William Markesbery, John Anthony, Adalin Wichman and John Egerton.

Raitz was nominated by Dean Mark Kornbluh, of the UK College of Arts and Sciences, who praised the geographer's valuable service to UK, Kentucky and the nation.

"To know Dr. Raitz's work intimately is to gain a rich appreciation of the American landscape," Kornbluh said. "His attention to detail is famous both among his peers and among the students who marvel at the depth of his knowledge."

Raitz arrived at UK in 1970 upon completion of his doctoral degree from the University of Minnesota. Over the years, his field-based research focused on blending rural and urban contexts, especially within America’s Middle West, Appalachia and South.  In addition to his work on American highways, he has also examined the relationships between European immigrants and occupational preadaptation, the social construction of sport and leisure places, and the creation of landscape symbol vocabularies.

The geographer has co-written, edited or co-edited eight books, five additional monographs, and more than 75 refereed articles and book chapters. Raitz has also won numerous regional and national awards, in addition to many teaching awards from UK College of Arts and Sciences and the National Council for Geographic Education.

After 43 years of service to UK and his profession, Raitz retired in December 2013.

The UK Libraries Annual Dinner will also recognize Tari Keller, recipient of the Paul A. Willis Outstanding Faculty Award. Named in honor of Paul A. Willis, who served as director of UK Libraries for three decades, the award recognizes outstanding library service. Recipients are selected based on achievements in primary assignment, national leadership, scholarship, teaching, creativity, innovation or service. To be eligible, nominees must have two or more years of continuous service and be currently employed by UK Libraries.

Since 1977, Keller has diligently worked to ensure access of UK Libraries' resources to students, faculty, staff and the public at large. A cataloger and systems librarian, Keller transitioned the university's libraries from card catalogs to different versions of computerized catalogs and online searching.

"She has been indispensable to the university and the Commonwealth of Kentucky as UK and other libraries transitioned from card catalogs to different versions of computerized catalogs and online searching," said Dean of UK Libraries Terry Birdwhistell.

Currently, Keller is investigating and consulting for the entire state of Kentucky a move to the "next generation ILS (integrated library system)." In addition to these recent consulting services, she has given more than 50 presentations on ILS options at state, regional, national and international meetings. She has also served for the past 14 years as the chair of the Council for Postsecondary Education Kentucky Virtual Library Voyager consortium, which provides oversight on the Voyager server to 19 Kentucky institutions.

Outside of Kentucky, Keller guided the Partnership Among South Carolina Academic Libraries in their migration to a shared ILS and she has presented a webinar on online public access catalogs (OPAC) for the Ex Libris Southwest Users' Group in California. She is also recognized as an expert in the running of Voyager OPAC and WebVoyage (InfoKat). She also assisted in the recent migration of Voyager service to Chicago.

As Kentucky’s premiere research library and one of the leading academic libraries in the United States, UK Libraries provides the foundation for student learning and faculty teaching and research. UK Libraries provides access to a wealth of information critical to academic success, including online books, journals, databases, unique collections and more. William T. Young Library has space for more than 4,000 patrons to study in quiet or participate in active group learning. The faculty and staff in Young Library and nine branch libraries are committed to meeting today’s information needs across the Commonwealth.