Third wave feminists have lived in an era with women in space, have seen three women as Secretary of State and one almost obtain the democratic nomination for President; accomplishments second wave feminists never saw while they were growing up.

However, like many movements that have made great strides, these accomplishments are examples of token arguments. The common misconception of such success is often that the hard work is over. For Hannah Alsgaard, a University of Kentucky undergraduate student in Gender and Women Studies (GWS), this could not be further from the truth. At 21, her work encompassing women’s rights and gender and sexuality issues has in fact just begun.

In May 2009, after only three years, Alsgaard, the focused and ambitious student she is, finished UK, degree in hand and internship under her belt as she marches through the doors of either Berkley or New York University School of Law. Yes, you read that right. In fact, she has already been accepted into both prestigious programs, among others, where she plans to explore gender and sexuality law. "It is an area of the law that has not really been developed and there hasn’t been a huge push to," Alsgaard said. 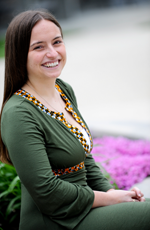 Unlike many college students who spend years contemplating the rest of their lives, as the anxiety of choosing a major builds, it only took one class in the GWS program to set Alsgaard’s future in motion. "The introductory course that I took was great. There were a lot of topics that I recognized, that I was interested in, that I wanted to pursue further and as I continued to take classes I realized more and more that women’s issues would be my life work," said Alsgaard.

Adding, "My interest in gender and sexuality law has been heavily influenced by what I have learned in the last three years at UK, particularly in the many GWS courses I have taken." Outside of her course work her most meaningful and valued educational experience was her internship at the Florence Crittenton Home in Lexington – a residential treatment facility for Kentucky’s young women facing single pregnancy and parenting, abuse and neglect.

"The experience opened my eyes to a whole new world of women’s issues. These girls were dealing with issues that spanned from rape to prostitution, to drug abuse to abandonment, and mental illness to genetic disorder. And despite all of this they just wanted to be teenage girls and straighten each others hair or go to the mall, even if they did have a baby on their hip,” she stated.

“My internship at the home is what made me recognize my desire to work in public interest law; there are so many girls who struggle through the legal system and desperately need assistance."

Her senior thesis on court-ordered or physician-coerced cesarean sections and the balance of power between the state and the mother, which her mentor Patricia Cooper oversaw, provides a glimpse into just one of the many fights in the legal system that stand before her.

Alsgaard noted an array of factors that play into why physicians prefer to perform cesarean sections instead of vaginal deliveries. A big one reason is insurance companies. "It is harder to get sued for malpractice if you have done everything that you can and surgery is seen as doing everything you can," she said.

Touching on her extensive research, Alsgaard noted an "unfortunate trend of removing women’s bodily integrity during pregnancy and delivery in the name of protecting the fetus. Changes in the way society and the court system view the rights of a woman as opposed to those of her fetus often manifest in ways that demean women since their bodies are transformed into protection and life-support systems for fetuses." Touching on an ongoing debate in this country: who do you protect more, the mother or the baby?

These are questions that Alsgaard is sure to debate in law school, among classmates and scholars, as she carves out her own voice in the much needed gender and sexuality charged dialogue; for as her research suggests the hard work is far from over.

"I do not know yet if I want to advocate for women’s reproductive rights, work as a family court judge with teenage mothers, do academic research, or even work in an administrative role in government. However, I do know that an undergraduate degree in GWS will aid me immensely after I graduate from law school, because the combination of an education from an elite law school and a knowledge base in GWS will allow me to provide a particular view on issues that very few people can."