WE DON'T HAVE TO SHOW YOU ANY STINKIN' FACTS (1)

We are currently mired, at least here in the US, in a political and cultural milieu where truth, facts, and logic are not only ignored by many citizens and alleged leaders, but are actively resisted. (2)   This drives scientists especially crazy, as we are trained and wired to argue and act based on hard evidence and logic. Our efforts in this regard are wildly imperfect, but it is a universally agree upon ideal, and in our world, while facts can be modified and tested, they cannot be ignored or denied. 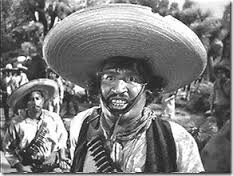 Alfonso Bedoya in the famous "no stinkin' badges" scene from the Treasure of the Sierra Madre.

For years there has been a great deal of (justified) hand-wringing over how scientists can and should communicate with the general public--how to translate complex and specialized concepts into understandable terms, without oversimplifying or trivializing them. These concerns have accelerated lately with respect to the deliberate obfuscation and politicization of issues such as climate change, sea-level rise, and environmental protection.

Voss, an associate professor in the Department of Political Science in the University of Kentucky Colleges of Arts and Sciences, discusses how Mitch McConnell defeated challenger Alison Lundergan Grimes in the Kentucky Senate race.

Voss, an associate professor and chair of the Department of Political Science in the University of Kentucky Colleges of Arts and Sciences, discusses Kentucky Senatorial candidates Mitch McConnell and Alison Lundergan Grimes and the national prominence of this election.

Governor Jon Huntsman of Utah, the former US Ambassador to China, will deliver a lecture at UK on Thursday, February 20th, 2014, at 7:30 pm in Memorial Hall. This lecture will address the possibilities and challenges represented by the current US relationship with China. A Q&A period will follow the lecture. Please encourage your students to attend if the topic is relevant to your courses or the workplace for which we are preparing our students. The lecture will be free of charge, and is sponsored by the Office of the President, UK International Center, and the UK Confucius Institute. The lecture title and complete information will be forthcoming in January.

Organized by UK's Scripps Howard First Amendment Center and the Honors Program, the candidate form will be held from 11 a.m. to 1 p.m. Thursday in the Cats Den.

The Honorable Albert B. Chandler III (Ben Chandler) received his B.A. in history in 1983 and his J.D. in 1986. He was elected Kentucky Attorney General in 1995 and served as the United States Representative for Kentucky's 6th congressional district from 2004 to 2013. A long-time supporter of arts and humanities at the state and national level, he is now executive director the Kentucky Humanities Council.

The course, designed for first-year students, aims to facilitate high-level discussion in a nonpartisan manner and to explore how elections really work. The focus will span across historical data from past elections, such as voter demographics, important cultural issues such as religion, women's rights and civil rights, to the key challenges that the nation faces for the 2012 election.

A panel of faculty members will address a growing debate in national health care policy on Oct. 11 at 6 p.m. in the White Hall Classroom Building, Room 114.

The Politics of Latin American Migration

Professor David Cook-Martin from Grinnell College and Professor Christian Zlolniski from University of Texas will be discussing immigration in politics and beyond.

Sin Pais (Without Country) attempts to get beyond the partisan politics of immigration issues by exploring one family's complex and emotional journing involving deportation.

Contact Rebecca Comage, rebecca.comage@uky.edu, for transportation needs and questions. We will be providing transportation for the first 20 students who rsvp.