Beyond the Mother Tongue: Learning Yiddish in America

Please register for this event!  It's free!  You can register at https://uky.zoom.us/webinar/register/WN_bR33A2dnRD6B4Yf4D9Zb6Q

This is the first lecture in the mini-series sponsored by World Religions on "Religion and the Environment".

Julia Watts Belser is an associate professor of Jewish Studies in the Department of Theology and Religious Studies at Georgetown University and core faculty in Georgetown's Disability Studies Program, as well as a senior research fellow at the Berkley Center.  She is the author of Rabbinic Tales of Destruction: Gender, Sex, and Disability in the Ruins of Jerusalem (Oxford University Press, 2018). She has held faculty fellowships at Harvard Divinity School and the Katz Center for Advanced Jewish Studies at the University of Pennsylvania.  She currently directs an initiative on disability and climate change, which brings together disability activists, artists, policy makers, and academics to address how disability communities are disproportionately affected by environmental risk and climate disruption. 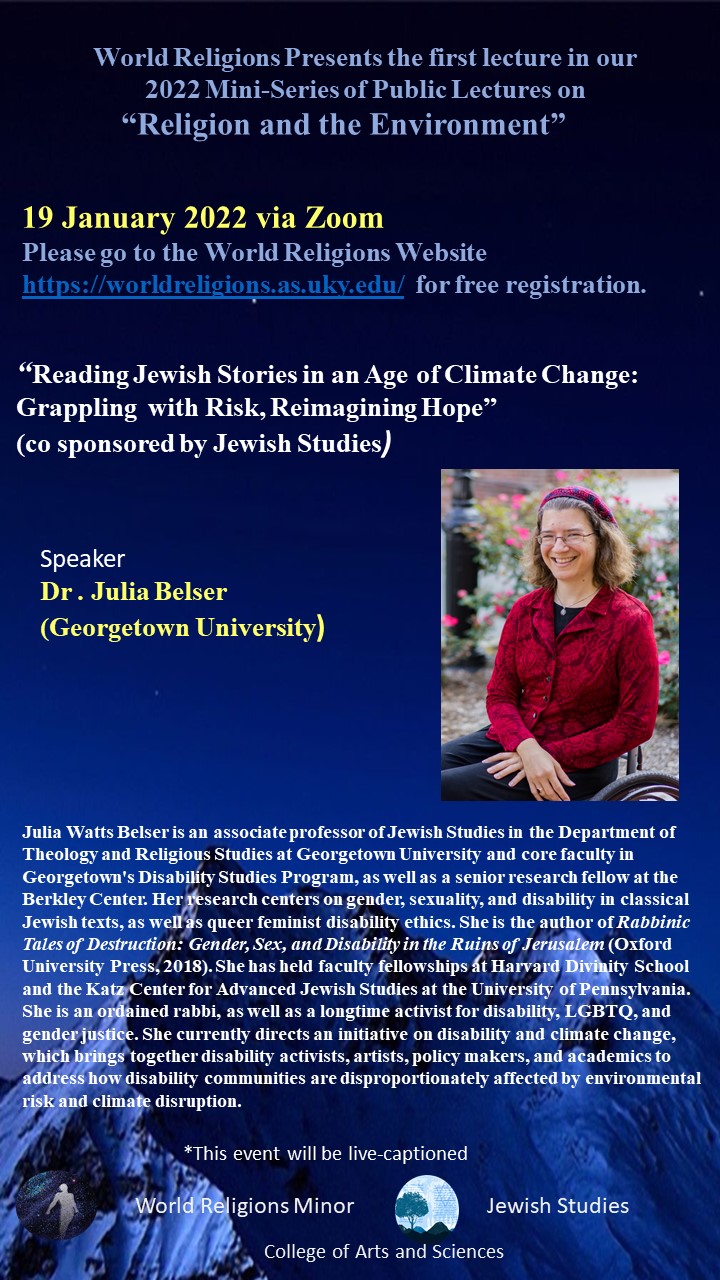 Professor Sinnreich is a scholar of Jewish experience during the Holocaust and European Jewry.  Dr. Sinnreich serves as the editor in chief of the Journal of Jewish Identities (Johns Hopkins University Press).  Dr. Sinnreich She has served as a fellow at the United States Holocaust Memorial Museum in Washington D.C. in 2007 and at Yad Vashem in Jerusalem in 2009. Her forthcoming book is entitled:The Atrocity of Hunger: Starvation in the Warsaw, Lodz and Krakow Ghettos.

Tableware Restrictions and Hospitality: The Case of Siberian Old Believers

Lecture: "Patronymic Salvage: Paintings, Photographs, and Daughters in Search of their Fathers"

Patronymic Salvage: Paintings, Photographs, and Daughters in Search of their Fathers

Abstract: Through an analysis of two image books featuring East European Jewish life in the years before the Holocaust with an eye toward "salvage poetics," or the poetics that arise out of post-Holocaust popular ethnographic constructions of pre-Holocaust images, in this lecture we consider how ethnic image books and family albums have become interchangeable in post-Holocaust America. Mayer Kirshenblatt's They Called Me Mayer July (2007) and Alter Kacyzne's Poyln (1999) were both edited by the daughters of the artists whose work is featured therein. Even while identifying their fathers in and around the images in the two books, each daughter acknowledges the inevitable anonymity that pertains to subjects captured just before a cataclysmic event and observed by strangers after it; not every person in every image can be named, as they can in a family album. But within the genre of post-Holocaust image books used to focalize the American-Jewish sense of community and history, these albums occupy a familiar, ethnic, place.

Jews & Booze: Becoming American in the Age of Prohibition

Marni Davis examines American Jews’ complicated relationship to alcohol during the late nineteenth and early twentieth centuries, the years of the national prohibition movement’s rise and fall. Davis offers a novel perspective on a previously unstudied area of American Jewish economic activity: the making and selling of liquor, wine, and beer. Alcohol commerce played a crucial role in Jewish immigrant acculturation and the growth of Jewish communities in the United States. But prohibition’s triumph cast a pall on American Jews’ history in the alcohol trade, forcing them to revise, clarify, and defend their communal and civic identities -- both to their fellow Americans and to themselves.

Screening of "My Perestroika" and Q&A with director Robin Hessman

Join us for an evening with filmmaker Robin Hessman and a screening of her award-winning documentary, MY PERESTROIKA (2010). The film tells the stories of five Moscow schoolmates who were brought up behind the Iron Curtain, witnessed the joy and confusion of glasnost, and reached adulthood right as the world changed around them. A Q&A with the director will follow the film.